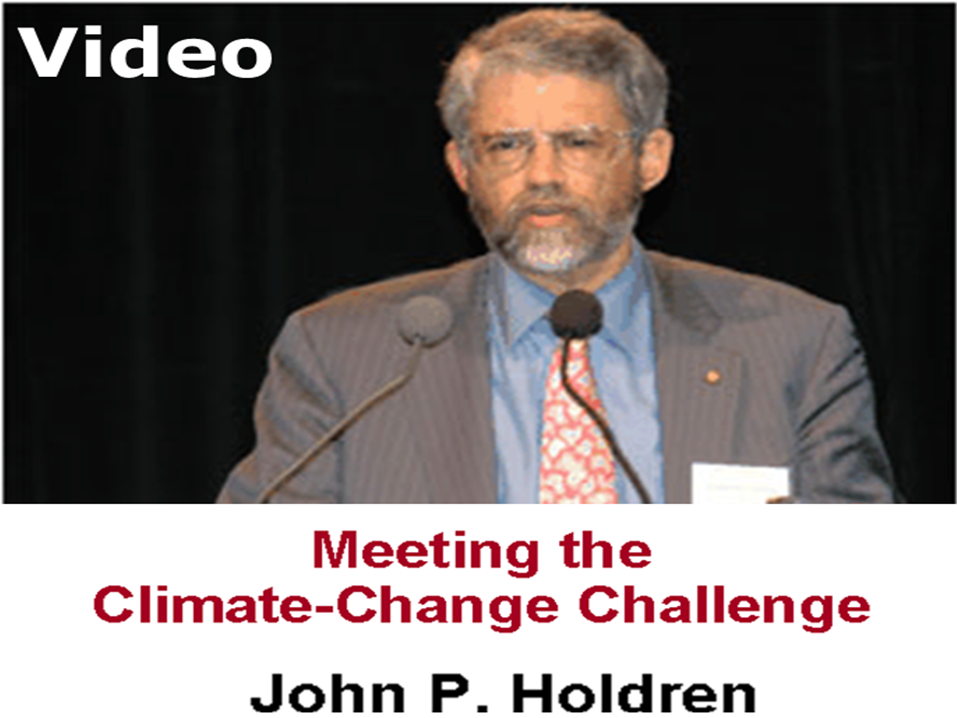 Could global climate change bring about a planetary catastrophe?
​
Yes that has always been the great fear, because catastrophe to humanity and to all all life ​would come about at a heating beyond survival. ​
​
IPCC 2007 AR 4 WG 3 2.2.4 Risk of Catastrophic or Abrupt Change
​
The possibility of abrupt climate change and/or abrupt changes in the earth system triggered by climate change, with potentially catastrophic consequences, cannot be ruled out. Positive feedback from warming may cause the release of carbon or methane from the terrestrial biosphere and oceans which would add to the mitigation required.
Tipping elements in the Earth's climate system Timothy M. Lenton et al  ​PNAS Feb 2008
"The ultimate objective of this Convention and any related legal instruments that the Conference of the Parties may adopt is to achieve, in accordance with the relevant provisions of the Convention, stabilization of greenhouse gas concentrations in the atmosphere at a level that would prevent dangerous anthropogenic interference with the climate system.
Such a level should be achieved within a time frame sufficient to allow ecosystems to adapt naturally to
climate change, to ensure that food production is not threatened and to enable economic development to proceed in a sustainable manner.

​​For many years people concerned about global warming have referred to runaway global warming and climate change​. This is not a scientific term. It is used to convey the risk on a totally uncontrollable self accelerating global warming situation brought about by a very large positive feedback due to several different feedbacks boosting each other in a vicious cycle. The scientific term is abrupt, irreversible, rapid warming.
The IPCC uses the term irreversible large-scale singularities.
​​
​The other runaway scientific term is the runaway greenhouse effect. This is the ultimate planetary catastrophe leading to the super heated dead planet like Venus, and the experts are agreed that while a limited greenhouse runaway could be triggered it would not end all life.
What are tipping points?
​The term ‘‘tipping point’’ commonly refers to a critical threshold at which a tiny perturbation can qualitatively alter the state or development of a system (T Lenton).
​It may be a surprise that there are worse climate change dangers than disastrous sea level rise, which is far into the future, happens slowly and impacts are restricted to coastal regions. There are other dangers far greater and sooner.
​
Note how the damaging impacts interact making all things worse​.
​This is why climate change is called The Great Multiplier
CLIMATE EMERGENCY INSTITUTE
​
​ The health and human rights approach to climate change
Recent research
by date​

31 July 2017 ​​Less than 2 °C warming by 2100 unlikely  A. E. Raftery
​​
2015 Global security threat A New Climate for Peace G7​​​
May 2018 UN Secretary General Climate change: An 'existential threat' to humanity, UN chief warns global summit
Children are most vulnerable
Atmospheric greenhouse gas pollution affects:
​'There is no such thing as ‘safe’ climate change (Royal Society)
​Even the global temperature increase to date (about 0.75°C) is contributing to effects that are impossible to adapt to in some regions As the temperature rises further, so will the risk of more widespread and dangerous climate impacts; from sea level rise, increasing frequency and intensity of climate extremes such as heat waves, floods and droughts,' (Royal Society December 2009 ​'Preventing dangerous climate change ​The need for a global agreement').
THE GREAT MULTIPLIER Global climate change has been known as the great multiplier.
It has a multiplier effect increasing many pre-existing global environmental degradations ​and
a multiplier effecton on existing socio-economic deprivations of billions of the most climate change vulnerable ​

Global climate change is uniquely disastrously and catastrophically dangerous because it adversely impacts all systems of the biosphere  and all human systems, impacts increasing with global temperature increase. Impacts interact adversely.

The IPCC 2018 1.5C report showed that ​​multiple widespread disastrous impacts at 1.5C and planetary catastrophic impacts at 2C (including runaway). However this was shown in the 2007 IPCC 4th assessment.

The 2 general catastrophic effects of the multiple impacts ​​are
​1) For humanity the collapse of world agriculture and of civilizationand for the planet biosphere collapse.
2) ​For all life biosphere collapse is associated with amplifying (+ve) feedbacks, abrupt climate change, tipping points, IPCC 'singularities', hothouse Earth and runaway, exacerbated by increasing extreme events.

AGRICULTURAL COLLAPSE  The single worst impacts on humanity (only) ​ is the multiple adverse impacts on agricultural crops (and livestock). Unmitigated global climate change (as now) leads to collapse of world agriculture followed by collapse of civilization
​​
GLOBAL COLLAPSE OF ECOSYSTEMS​ We are in the 6th mass extinction of species due to global ecosystem degradation and destruction. UN ecosystem assessments show human civilization is headed to collapse due to this cause
​  ​​
FEEDBACK RUNAWAYBIOSPHERE COLLAPSE The overall worst impact on planet and human populations is multiple interacting amplifying feed-backs​. Unmitigated climate change inevitably leads to all of these feed-backs being irreversibly triggered.
CARBON SINK FAILURE ​Making matters even worse the terrestrial forest carbon sink fails with increasing warming, and the ocean sink will fail under to much ocean heat.
We have already brought about the 6th mass extinction. All climate change indicators are at record high and accelerating.
​Multiple feed-backs leads to hothouse Earth and runaway - the end of our world, the human race and almost all species- the greatest extinction of life ever. 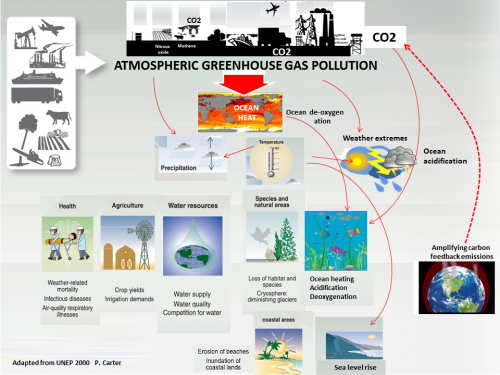 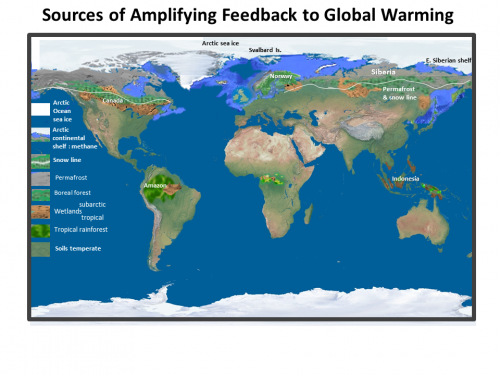 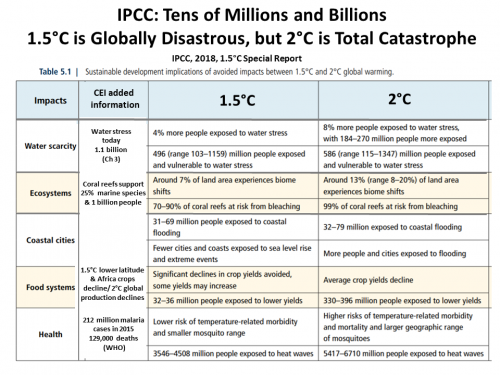 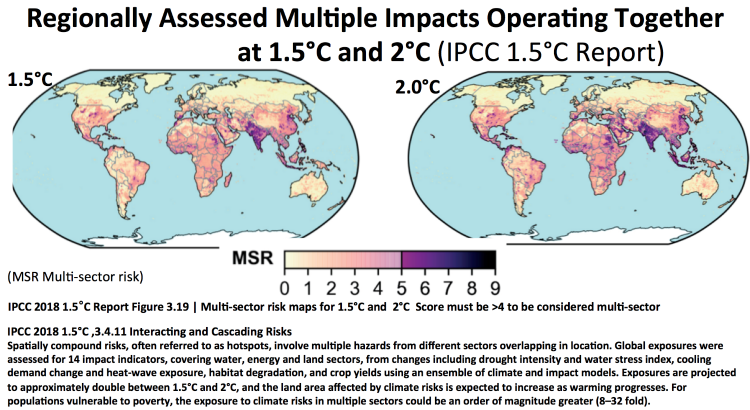 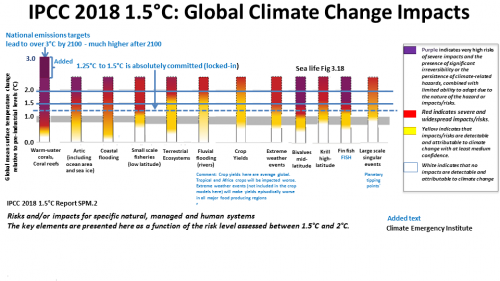 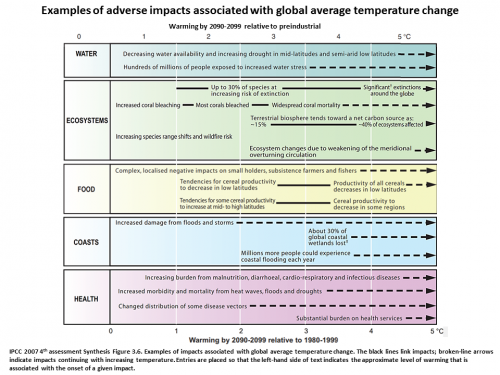 The IPCC assesses computer modeled global climate change impacts under modeled projected warming to 2100, which is an inadequate assessment to protect human population health.
An evironmental health impacts assessment (which we should have been using by assessing GHG pollution) is ​broader by assessing all imp[acts from all sources of GHG emissions.
Computer modeling is not necessary to know the impacts of global climate change under ​increasing global surface temperature, which are predictable by the basic well known science, recorded in the first 1990 IPCC assessment. In particular this applies to the multiple adverse human health impacts.

​​HUMAN HEALTH Human population health (multiple adverse impacts), since 1990 have only been confirmed and found to be worse. These are the direct effect of surface warming and of multiple increasing extreme events (IPCC includes forest fires). Increasing water and food insecurity are key confirmed impacts already taking place. 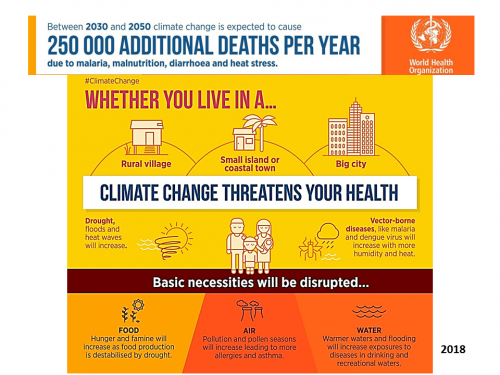 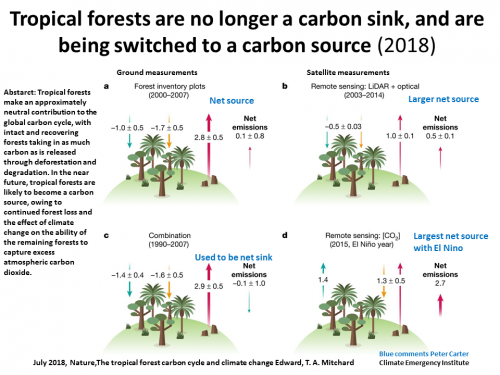 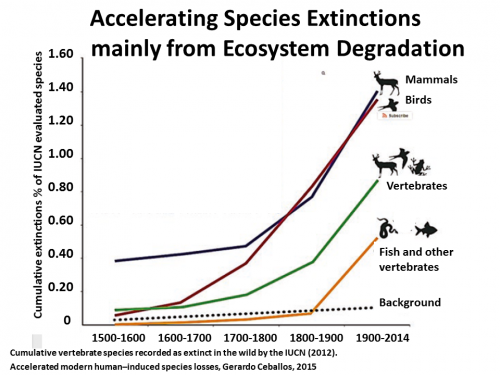 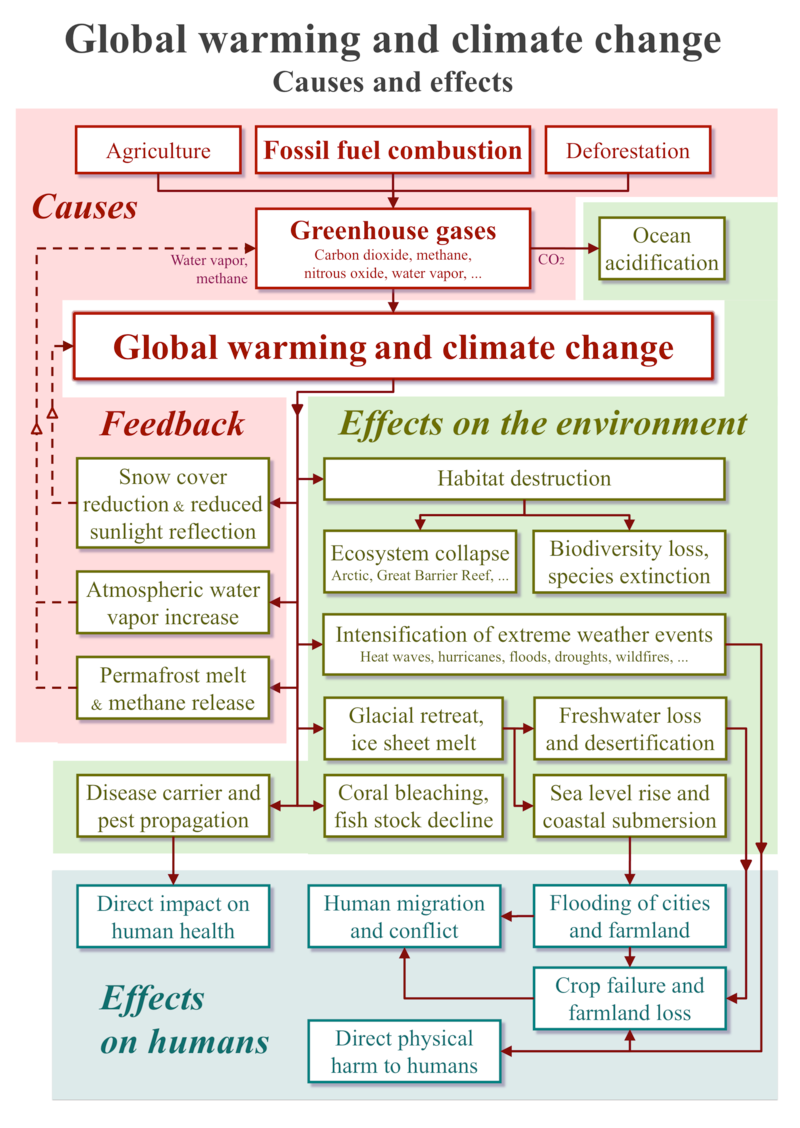 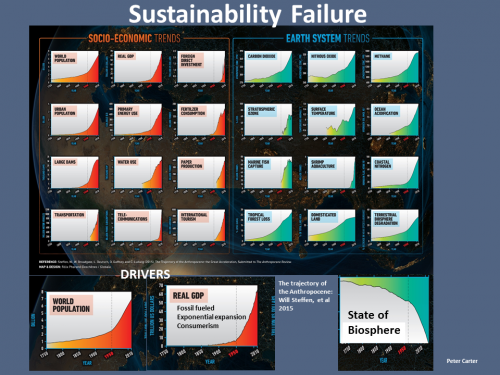 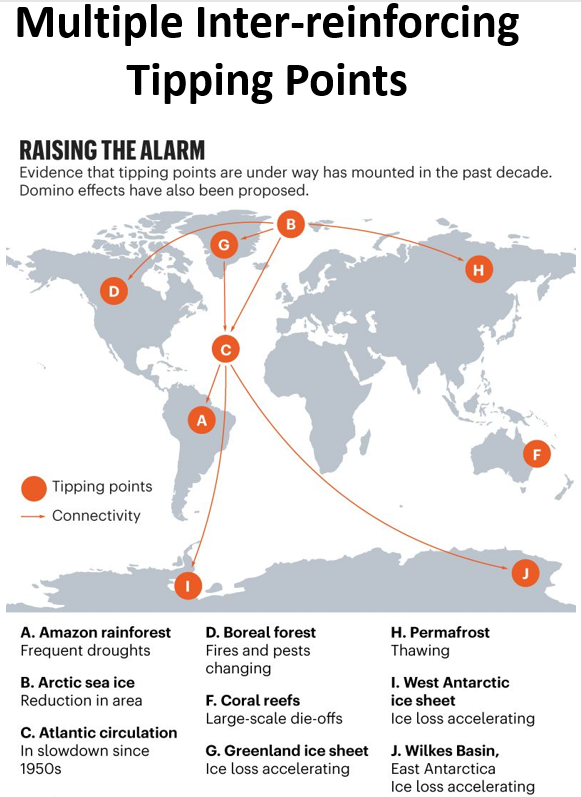 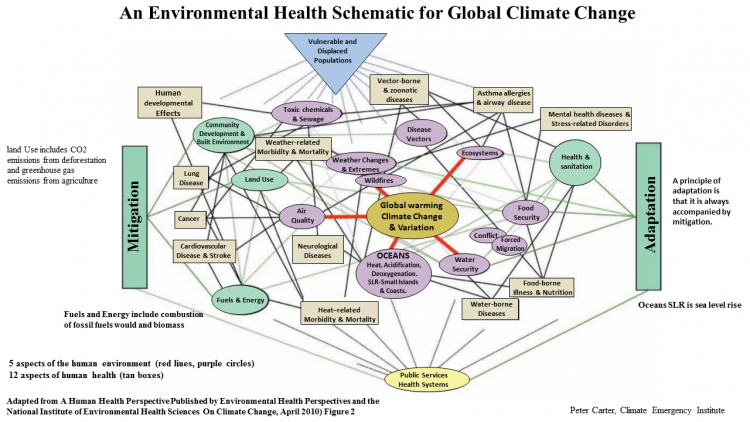 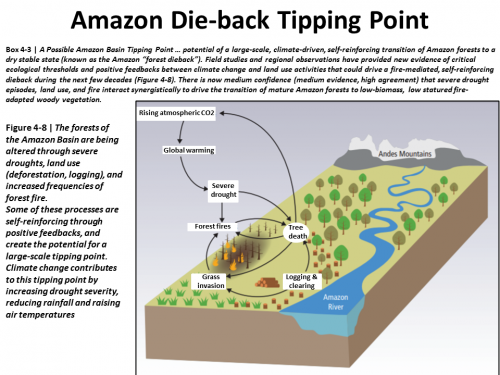