The IPCC
​ on the Arctic 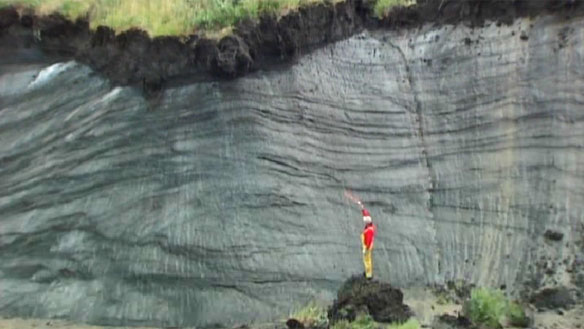 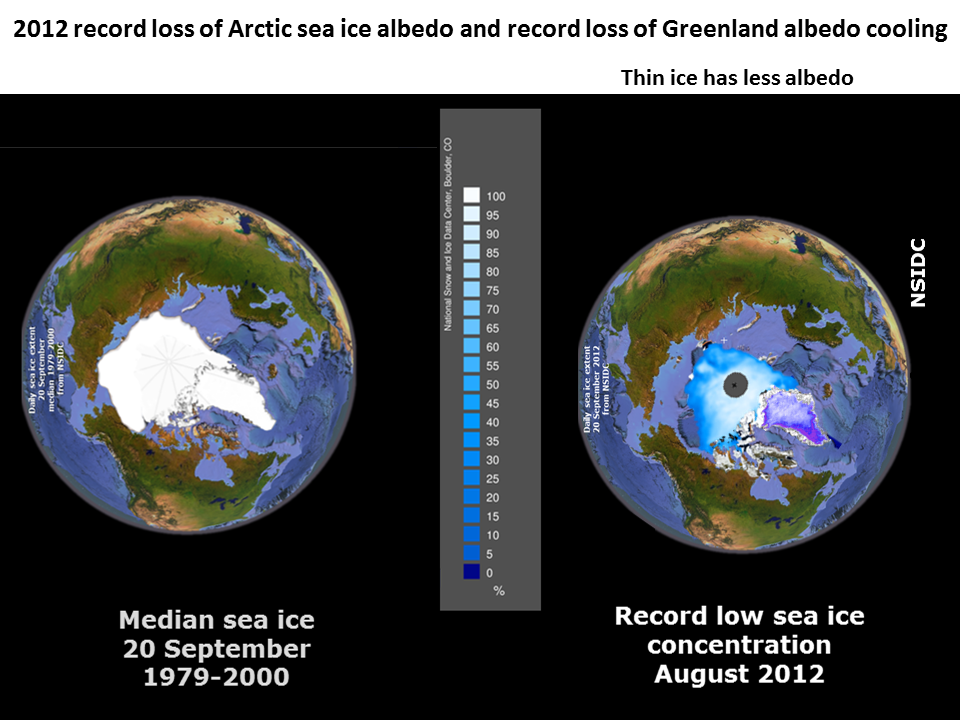 http://www.ipcc.ch/publications_and_data/ar4/wg3/en/ch2s2-2-4.html
IPCC AR 4 WG 3 2.2.4 Risk of Catastrophic or Abrupt Change
The possibility of abrupt climate change and/or abrupt changes in the earth system triggered by climate change, with potentially catastrophic consequences, cannot be ruled out. Positive feedback from warming may cause the release of carbon or methane from the terrestrial biosphere and oceans which would add to the mitigation required.

http://www.ipcc.ch/pdf/assessment-report/ar4/wg2/ar4-wg2-chapter15.pdf
In both polar regions, components of the terrestrial cryosphere and hydrology are increasingly being affected by climate change (very high confidence). These changes will have cascading effects on key regional bio-physical systems and cause global climatic feedbacks (very high confidence).

http://www.ipcc.ch/publications_and_data/ar4/wg1/en/ch8s8-7-2-4.html
8.7.2.4 Methane Hydrate Instability/ Permafrost Methane
Methane hydrates are stored on the seabed along continental margins where they are stabilised by high pressures and low temperatures, implying that ocean warming may cause hydrate instability and release of methane into the atmosphere. Methane is also stored in the soils in areas of permafrost and warming increases the likelihood of a positive feedback in the climate system via permafrost melting and the release of trapped methane into the atmosphere.

​​Both forms of methane release represent a potential threshold in the climate system. As the climate warms, the likelihood of the system crossing a threshold for a sudden release increases. Since these changes produce changes in the radiative forcing through changes in the greenhouse gas concentrations, the climatic impacts of such a release are the same as an increase in the rate of change in the radiative forcing.


Chapter 7: Climate System-Biogeochemistry Couplings
– “Recent modeling suggests that today’s seafloor CH4 inventory would be diminished by 85% with a warming of bottom water temperatures by 3°C” (Buffett and Archer, 2004). (Ch. 7.4.1.1)


Chapter 10: Global Climate Projections
– “… some sources of future radiative forcing are yet to be accounted for in the ensemble projections, including those from land use change, variations in solar and volcanic activity, and CH4 release from permafrost or ocean hydrates.” (Ch. 10.5.1)


Ch. 19: Assessing Key Vulnerabilities and the Risk
From Climate Change (“key vulnerability”)
– “AR4 temperature range (1.1-6.4°C) accounts for this [climate-carbon cycle] feedback from all scenarios and models but additional CO2 and CH4 releases are possible from permafrost, peat lands, wetlands, and large stores of marine hydrates at high latitudes.”

http://www.ipcc.ch/ipccreports/tar/wg2/index.php?idp=431
IPCC 2001 11.2.1.5. Cryosphere and Permafrost
Because large quantities of carbon are sequestered in the permafrost of boreal peatlands and tundra regions (Botch et al., 1995; Ping, 1996), changes in distribution of frozen ground and systematic increase in the thickness of seasonally thawed layer are likely to result in the release of large amounts of CO2 and possibly methane (CH4) into the atmosphere.

http://www.ipcc.ch/pdf/assessment-report/ar4/wg2/ar4-wg2-chapter15.pdf
15.4.1. page 662
​Methane hydrates: significant amounts of methane hydrates are contained in sediments, especially on Arctic continental shelves. As these areas warm, this methane may be released, adding to the greenhouse gas concentration in the atmosphere.
http://www.ipcc.ch/publications_and_data/ar4/wg1/en/ch4s4-7-2-4.html 4.7.2. Subsea Permafrost Subsea (or offshore) permafrost refers to permafrost occurring beneath the seabed. It exists in continental shelves of the polar regions. Subsea permafrost formed either in response to the negative mean annual sea-bottom temperature or as the result of sea level rise so that terrestrial permafrost was covered by seawater. Although the potential release of methane trapped within subsea permafrost may provide a positive feedback to climate warming, available observations do not permit an assessment of changes that might have occurred.
http://www.ipcc.ch/publications_and_data/ar4/wg1/en/ch7s7-4-1-2.html Climate also affects the stability of CH4 hydrates beneath the ocean, where large amounts of CH4 are stored (~4 ×106 Tg; Buffett and Archer, 2004). The δ13C values of ancient seafloor carbonates reveal several hydrate dissociation events that appear to have occurred in connection with rapid warming episodes in the Earth’s history (Dickens et al., 1997; Dickens, 2001)

Arctic amplifying feedback runaway risk
‘Should a sizeable fraction of this Arctic frozen carbon be released as methane and CO2, it would increase atmospheric concentrations, which would lead to higher atmospheric temperatures. That in turn would cause yet more methane and CO2 to be released, creating a positive feedback, which would further amplify global warming.’ (AR5 WG1 FAQ 6.1)


Multiple large sources of amplifying feedback
‘There is very high confidence that the Arctic region will warm most rapidly’. (AR5 WG1 SPM)

‘Examples that could lead to substantial impact on climate [i.e., amplifying carbon feedback] are the boreal-tundra Arctic system and the Amazon forest. Carbon storedin the terrestrial biosphere (e.g., in peatlands, permafrost, and forests) is susceptible to loss to the atmosphere [i.e amplifying carbon feedback] as a result of climate change, deforestation, and ecosystem degradation (high confidence). Increased tree mortality and associated forest dieback is projected to occur in many regions over the 21st century, due to increased temperatures and drought. Forest dieback poses risks for carbon storage and biodiversity.’ (AR5 WG2 SPM p. 15)


‘Carbon stored in the terrestrial biosphere is susceptible to loss to the atmosphere as a result of climate change, deforestation, and ecosystem degradation (high confidence). The aspects of climate change with direct effects on stored terrestrial carbon include high temperatures, drought and windstorms; indirect effects include increased risk of fires, pest and disease outbreaks. Increased tree mortality and associated forest dieback is projected to occur in many regions over the 21st century (medium confidence), posing risks for carbon storage, biodiversity, wood production, water quality, amenity, and economic activity. There is a high risk of substantial carbon and methane emissions as a result of permafrost thawing.’ (AR5 SYN Long-27)
​​IPCC AR5 WG2
4.3.3.4. Tundra, Alpine, and Permafrost Systems
​Frozen soils and permafrost currently hold about 1700 PgC, more than twice the carbon than the atmosphere, and thus represent a particularly large vulnerability to climate change (i.e., warming)

Moreover, this feedback is already accelerating due to climate-induced increases in fire (McGuire et al., 2010; O’Donnell et al., 2011). The rapid retreat of snow cover and resulting spread of shrubs and trees into areas currently dominated by tundra has begun, and will continue to serve as a positive feedback accelerating high-latitude warming (Chapin III et al., 2005; Bonfils et al., 2012). 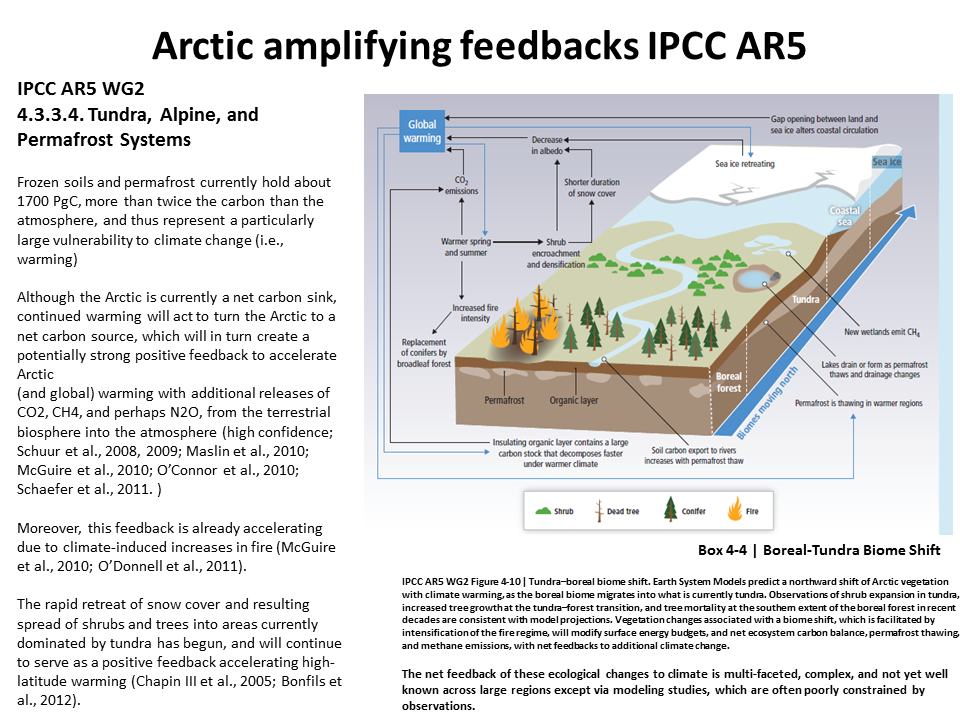