Greenhouse emissions
​Though the main greenhouse gases (carbon dioxide oxide, methane, nitrous, ground level ozone) cause most of the warming we have talk about 'greenhouse emissions' because recent research has found that black carbon (soot) is probably second to CO2 as an emission causing global warming. Fossil fuels are well known as the main source of CO2 but also are a source of almost greenhouse emissions.
​
Black carbon soot
Black carbon causing warming in two ways. Being black soot  is a good heat absorber ​​in the atmosphere and also on snow where it reduces the albedo cooling effect.
​
Acid aerosol cooling emissions
Also we must remember the the warming from greenhouse
​emissions ​​is off set by acid aerosol cooling emissions,
​from volcanic eruptions transiently and fossil fuel air
​pollution constantly.
Greenhouse Emissions 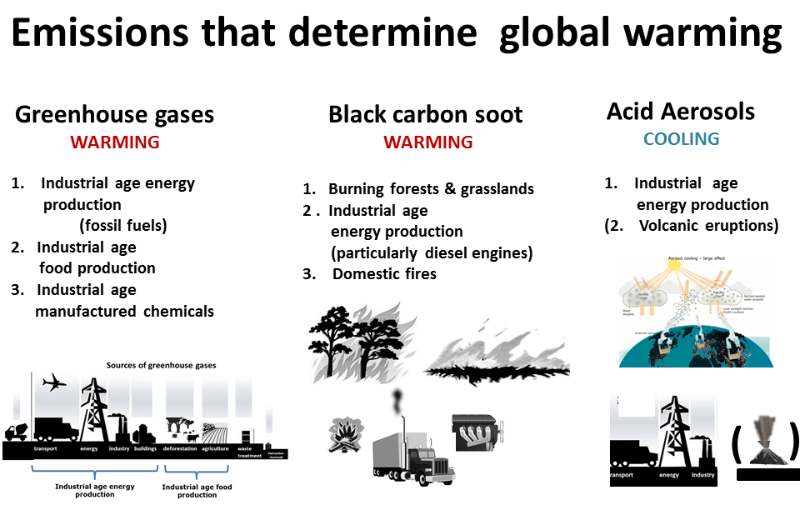 Industrial energy production is the main ​​source of GHG emissions

​ become over 80% of the energy comes from burning and there are
​ no plans to change this.
​
The source ​of energy that made for the easy labor saving affluent lives of many, is now ruining life in the future for us all through the constant
​emission of very last lasting GHGs (mainly CO2) into the atmosphere.

​​Fossil fuel toxic emissions disable and kill a huge number of people through toxic air pollution. Most of the chronic disorders of the industrialized world have a fossil factor causing them.

FOSSIL FUEL GREENHOUSE EMISSIONS
Fossil fuels are the major source of CO2 emissions and coal has always been the worst for toxic air pollution and GHG emissions (including CO2 ocean acidification). Most countries still rely on coal and still subsidize coal.
​​But are also several other greenhouse emissions.

Tropospheric (ground level) ozone is a GHGs, formed by a chemical reaction between air pollutants emitted by fossil fuels catalyzed by sun warmth.

Fossil fuels are a source of BC Black Carbon (soot)  mainly from diesel engines. ​​
​
Ethane ​Propane and Butane
These GHGs are all ​fugative emissions from the natural gas industry, especially now fracking.
Ethane is emitted from the use of fossil fuels generally and as such has been used a fossil fuel carbon emissions marker. Ethane is also involved in the chemical reaction producing ground ozone in the air (a GHG). ​

Fossil fuel pollution as well as heating the ​​planet today, is storing up much more heat that will hit us hard in the future and last practically for ever.
​
​Zero carbon emissions
The science is definite that to stabilize global temperature and ocean acidification we must stop all industrial carbon emissions.
​​Instead of heading towards zero CO2 emissions, they are increasing and faster than ever.
Ever since 2008 the International Energy Agency in its annual World Energy Outlook ​has been warning that the world is on energy-emissions scenario that leads to a warming of at least 6C by 2100.

That is actually the most accurate global temperature prediction from anywhere.​​
​
In July 2013 the US Energy Information Administration projected world energy consumption will increase 56% by 2040 and that the vast majority of it will still be fossil fuels.
​​
​​That is clearly a planetary emergency because atmospheric greenhouse concentrations are at an extreme unprecedented (never before) high level already. 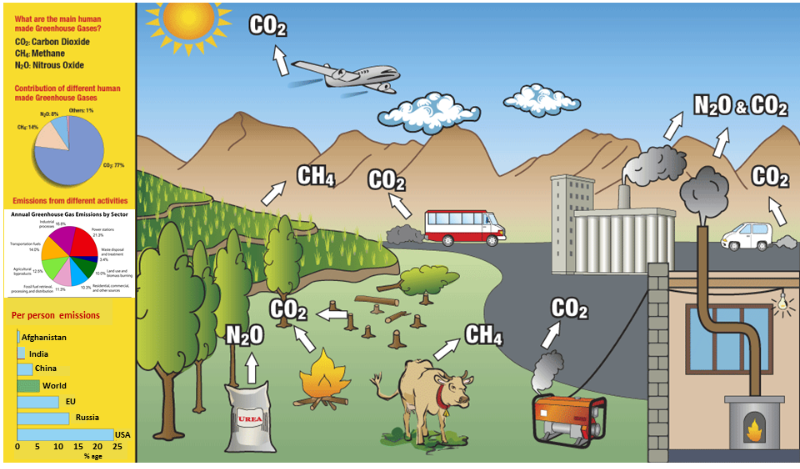 CO2 ​equivalent emissions
​It is most important that emissions are by CO2 equivalent rather by CO2 only as is often the case.

​​CO2 equivalent includes methane and nitrous oxide calculated as the equivalent amount of CO2
​
Emissions are a new record every year.
2012 was a new record on world carbon emissions.
​
​Other non CO2 green​house gas emissions continue to increase.

​​The industrial age diet is meat heavy- bad for people and the planet. ​​
Nitrous oxide: main source is large scale agriculture that depends on large amounts of chemical nitrogen fertilizer, which is made from natural gas. ​
Another food production source is livestock waste​.
​
Fossil fuel energy is used by industrial food production due to a lot of long and short distance food transportation and refrigeration.

​​Deforestation is a large source of CO2 emissions, because clearing o forest allows the carbon on and in the forest floor to be emitted and there is no forest left to re-absorb the carbon. 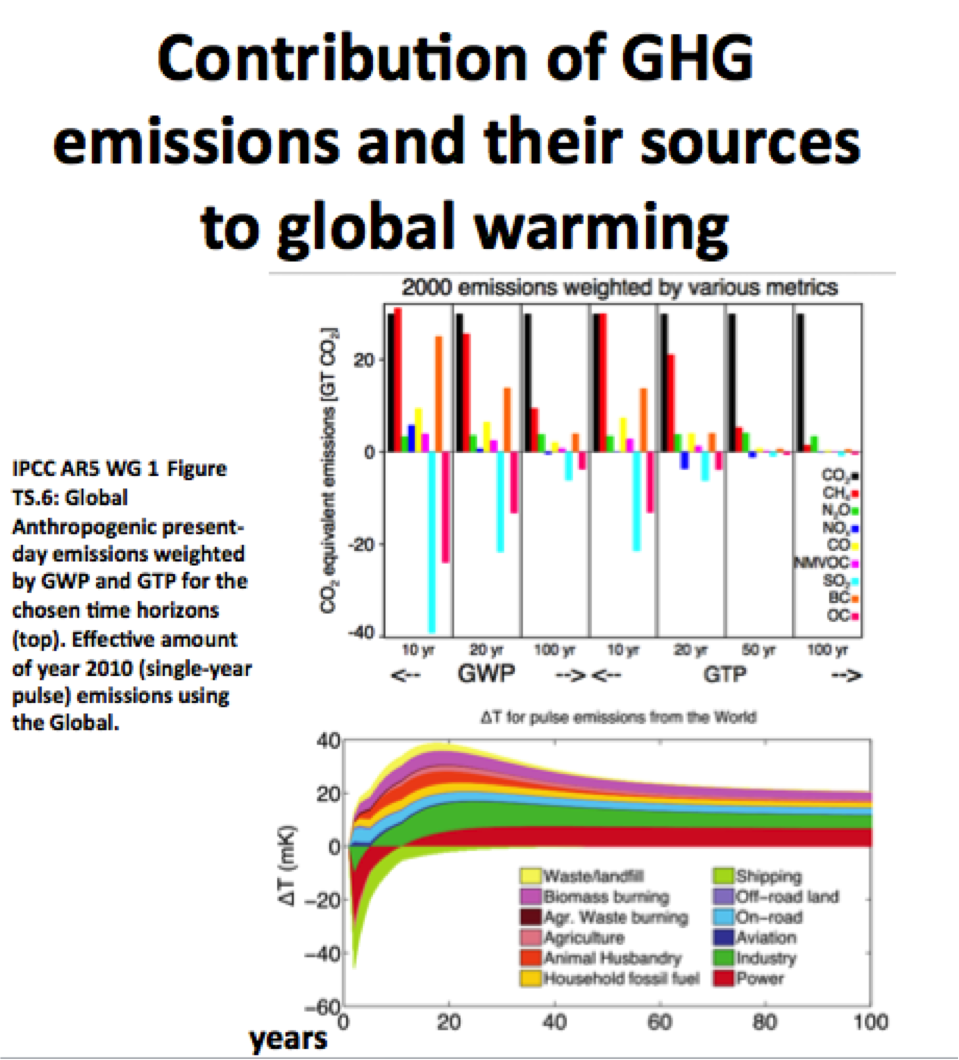 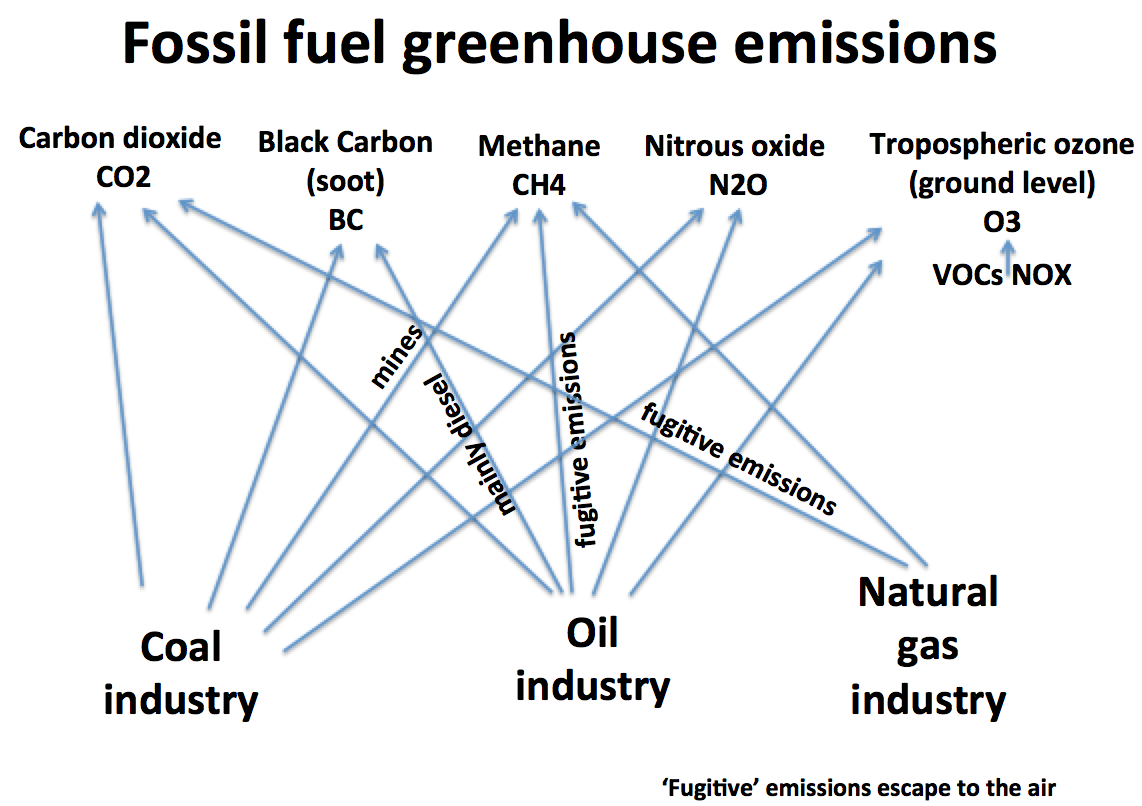 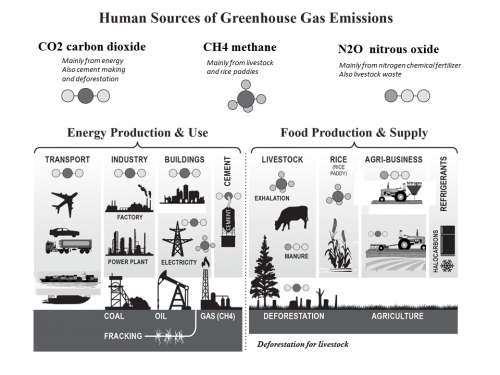 5 Mar 2020 ​Emissions: world has four times
the work or one-third of the time

27 June 2019 Planes are even worse for the climate than we thought: contrails 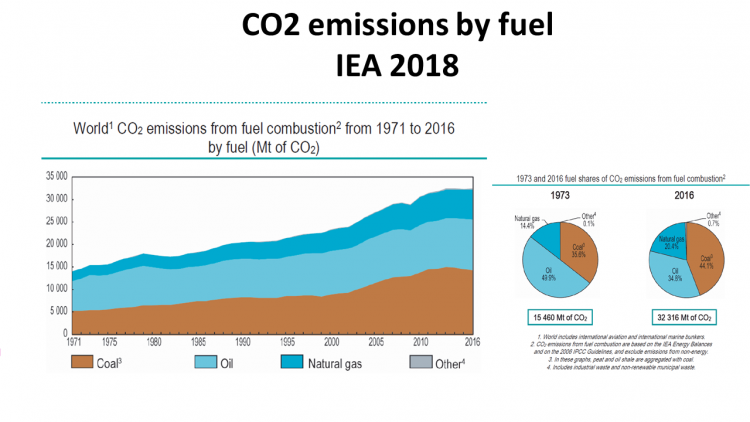 Global CO2  emissions are still increasing, by 2.7% in 2018 and 0.6% 2019.
...increasing vehicle ownership and air travel in Asia are poised to increase global ​CO2 emissions from oil over the next decade or more
​

National emissions targets lead to a substantial continued global increase by 2030 which is a global suicide scenario (2019). ​
CO2 Emissions 2018 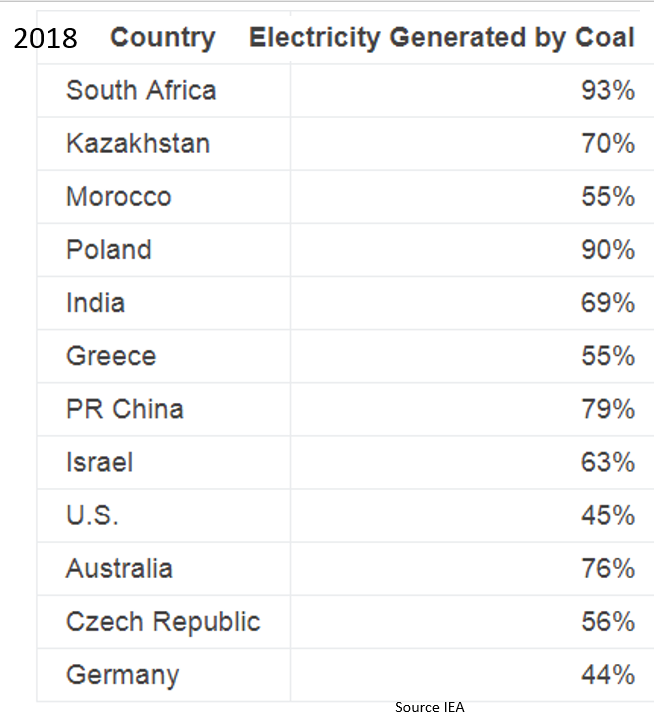 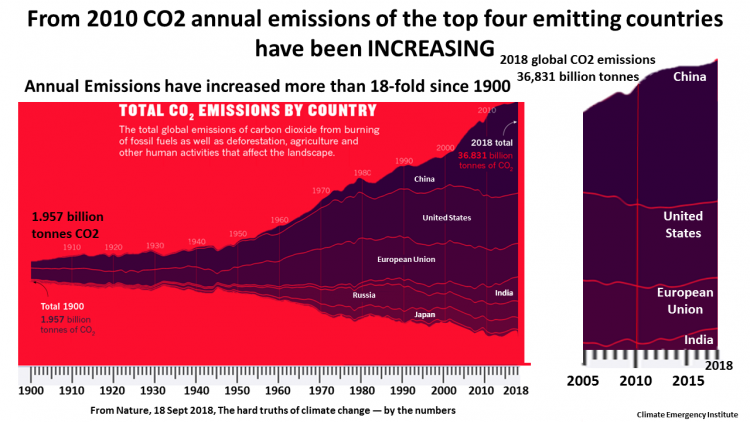 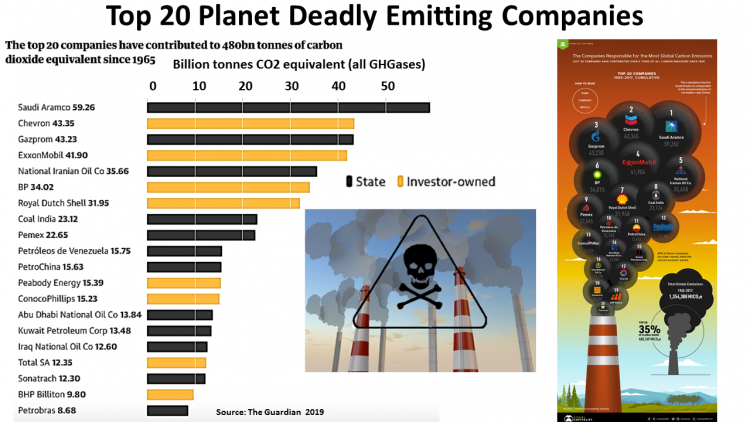 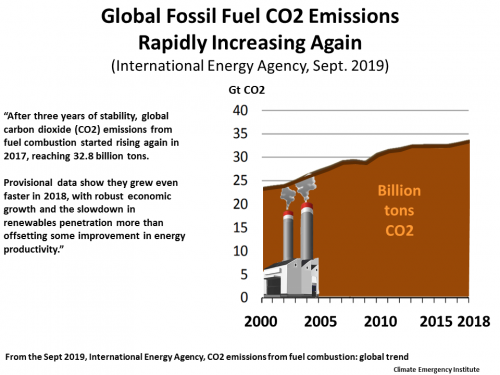 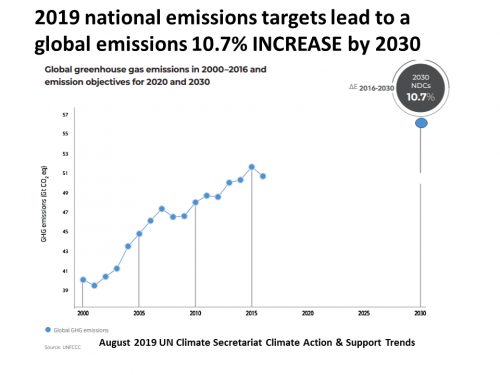 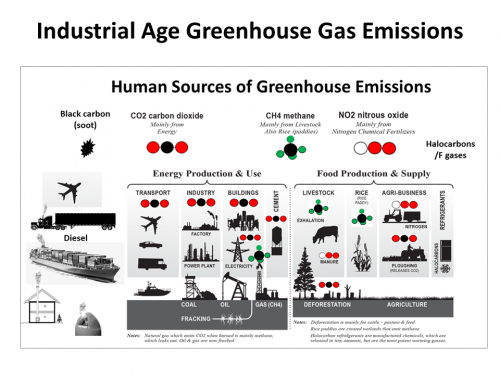