Other online resources
CLIMATE EMERGENCY INSTITUTE
The Health and Human Rights Approach to Greenhouse Gas Pollution
Greenhouse gas emissions are deadly pollution forever, ​but the main source of emissions, fossil fuels, emits deadly air pollution today.
So the big issue is actually fossil fuel pollution. ​
​
​F. Perera 2017 Pollution from Fossil-Fuel Combustion is the Leading  Environmental Threat to Global Pediatric Health and Equity.
​Continuing today’s patterns of carbon-intensive energy use is estimated, ​together with climate change, to cause 6 million deaths per year by 2030, close to 700,000 of which would be due to climate change. This implies that a combined climate-carbon crisis is estimated to claim 100 million lives ​between now and the end of the next decade.

Today already committed (locked in) global climate change is a dire and terrible emergency for the future of today's children the world over.

​​UN Climate Secretriat report 02 AUG, 2016
​Climate Change Mainly Impacting Vulnerable Children
​
​Childen of all regions are more vulnerable ​to all impacts of ​climate change on  ​human populations a vulnerable sub-population).
​'Older and younger people are also especially sensitive to climate ​change impacts.
​Children's developing immune, respiratory, and  neurological systems make them more sensitive to some climate change impacts, including more frequent or severe ​extreme events, ​increased heat, and worsened air quality.' (EPA).
​Babies and small  ​children have poorer temperature regulation. Young children aremore likely to die  ​from or be severely compromised by diarrheal ​diseases (increase with global change) ​and floods.​​
​Children are dependent on other people.Children constitute ​roughly half of all persons affected by disasters.
​In 2007, Save the Children estimated that over the next decade, up to 175 million children worldwide will be affected by climate change-related disaster.

Also, because atmospheric greenhouse gas levels and global climate change are now accelerating, with all impacts happening now and much faster than anticipated, and national governments are doing next to nothing about it,  the generation of today's ​​children will grow up in an extremely dangerous climate. Among the impacts is increasing conflict and decreasing food security.

Also, because of already committed climate change, children will grow up in an increasingly poor and hostile planet with declining biodiversity. ​​

A focus on children ​​is generally not included in global climate change impact reports and plans.

IPCC Assessments ​
​
The 2014 IPCC WG2 climate change impacts assessment for policy makers does not mention children or young people despite the fact that it covers vulnerability.

​​Children are not well covered by the IPCC assessment Summaries for Policy Makers .
Increased vulnerability is recognized since the 1992 2nd assessment SPM, increasingly in the 200 3rd assessment.
Scant recognition in the 2007 4th assessment SPM and none in the 2014 5th assessment SPM, despite the fact that research findings on children had greatly increased, and is included here.
As the AR5 Health Chapter said In summary, we conclude that climate change will have a substantial negative impact on childhood undernutrition, particularly stunting; and on undernutrition-related child deaths the omission of children in the SPM is extraordinarily negligent.

UNICEF is a top source of information (use search) but UNICEF's site does not highlight the issue.

UNICEF 2014 The Challenges of Climate Change Insight Children on the front line
2016 Rema Hanna and Paulina Oliva Implications of Climate Change for Children in Developing Countries
​This was under the Future of Our Children pogram at Princeton
UNICEF 2011 The benefits of a child-centred approach to climate change adaptation. This is essential right now, but without agressive mitigation at the same time is unlikely to have lasting benefit. Of cource children cannot adapt and the best adaptation is funding and upgrading of public health services.
The US based Children's Environmental Health Network addresses Climate Change and Children's Environmental Health
Communicating the reality of increasing climate change disasters and catastrophes is a dilemma. They have a right to know, but at what age. 2017, M. Ojala and Y. Lakew,​  Young People and Climate Change Communication
2007 UNICEF Climate Change and Children
2015 American Academy of pediatricians policy statement Global Climate Change & Children’s Health
2009 UNICEF Global Climate Change and Child Health: A review of pathways, impacts and measures to
improve the evidence base, Yoko Akachi, Donna Goodman, David Parker.
2016  Center for Climate Change and Health- focus on Children
2017 UNICEF ​Thirsting for a Future: Water and Children in a changing climate. (A top organization for information )
2012 DARA Climate Vulnerability Monitor
400,000 climate change related deaths/year.
​Most are children in ​the most vulnerable regions
08 UNICEF VIDEO
​Climate change &
​children's rights​ 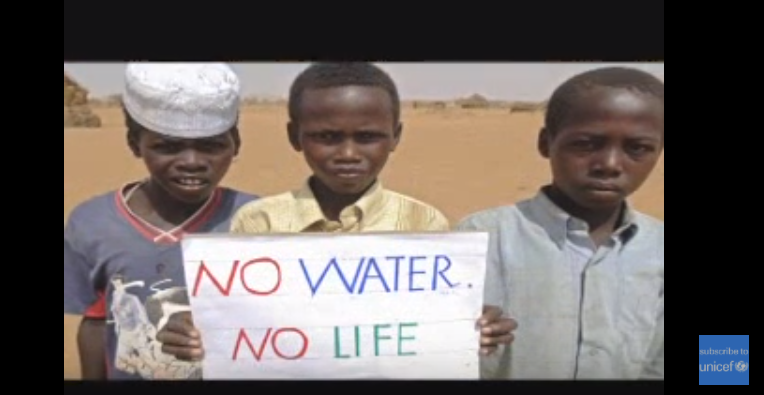 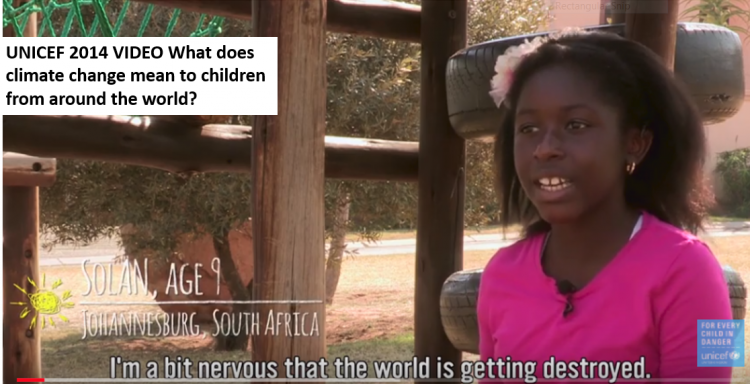 UNICEF 2014 VIDEO What does climate change mean to children from around the world?

The most climate change vulnerable countries ​​(March 2018 HSBC)
​India, Pakistan, Philippines Bangladesh (in that order).
Climate change will exacerbate ongoing causes of morbidity and mortality amongst children.
​UNICEF 2017 Levels & Trends in Child Mortality. The world has made substantial progress in reducing child mortality in the past several decades. Even so every year, millions of ​children under 5 years of age die, mostly from pneumonia, diarrhoea and malaria. In almost half of the cases, malnutrition plays a role, with unsafe water a signifcant factor. All of these are predicted to increase with global climate change​. Also huge disparities in under-fve ​mortality exist across regions and countries.
Recent Reports and resources
Research
by date
​
27 Sept 2021 Climate change is disproportionately affecting children
​​
14 Jan 2021 ​​Climate impacts associated with reduced diet diversity in children 19 countries (already suffering)
28 Sept 2020 Climate Change Impacts, Trends and Vulnerabilities of Children in Sub Saharan Africa ​​
​
Lancet Nov 2019 ensuring that the health of a child born today is not defined by a changing climate
​
Oct 2019 UNICEF State of the ​World Children Food & Nutrition: 149 million
children aged under 5 still suffer from stunting and almost 50 million
from wasting; 340 million children suffer from the hidden hunger of
deficiencies of vitamins and minerals. Climate change features.

March 2017 UNICEF Thirsting for a Future​​

2017 WHO  Don’t pollute my future! THE IMPACT OF THE ENVIRONMENT
ON CHILDREN’S HEALTH​​

​​2011 UNICEF Children’s Vulnerability to Climate
Change and Disaster Impacts in East Asia and the Pacific
August 2nd 2016. ​UN Climate Secretariat report Climate Change Mainly Impacting Vulnerable Children. The top authoritative report.
Gender The vulnerability of babies and small children is linked to the vulnerability of women in poor and developing countries, as they are the child bearers and main care givers, making this ODI 2011 review doubly relevant (Gender, generations, social protection & climate change: a thematic review.
2015 Plan Int. We Stand as One, includes consultations with children.
UNICEF The economics ?2012 Making the Case: Costs and benefits of climate change impacts on children
UNICEF 2013 Youth in action on climate change: inspirations from around the world
2017 UN Video Inspiring Human Rights Council  on climate change and the rights of the child.
2014 UNICEF The Challenges of Climate Change Children on the front line
UNICEF
​Resources
2007 UNICEF Climate change and children
“We call on all members of society to join us in a global movement that will help build a world fit for children through upholding our commitments to the following principles and objectives…
“Protect the Earth for children. We must safeguard our natural environment, with its diversity of life, its beauty and its resources, all of which enhance the quality of life, for present and future generations. ( A World Fit for Children, 2002,  UN  Special Session on Children, 2002)
1.5 to Stay Alive Under the 2015 UN Paris Agreement nations committed to the
1.5C global warming safety limit, which is now the limit adopted by climate science.
The old (1996) 2C policy limit would be an unprecedented crime against the world's children and humanity (2018 book Unprecedented Crime...). The science dictates that this requires the immediate rapid reductions in global emissions.    ​   ​
Children in industrially developed counties as well?
​
Quite rightly all reports ​stress that the most vulnerable children live in under industrially developed regions where the population is poorest and least to blame for climate change. However the children of the poorest families everywhere are more vulnerable.  Even in the most advantaged developed countries, we have already seen how children are most vulnerable to extreme weather disasters, like heat waves and floods. This IPCC predicts this and other impacts affecting children will increase. 'Throughout the 21st century, climate-change impacts are projected to slow down economic growth, make poverty reduction more difficult, further erode food security, and prolong existing and create new poverty traps, the latter particularly in urban areas and emerging hotspots of hunger. Climate-change impacts are expected to exacerbate poverty in most
developing countries and create new poverty pockets in countries with increasing inequality, in both developed and developing countries' IPCC 2014 WG2 SPM p. 20. This happening. The IPCC 2014 WG2 SPM reports: Impacts from recent climate-related extremes, such as heat waves, droughts, floods, cyclones, and wildfires, reveal significant vulnerability and exposure of many human systems to current climate variability (very high confidence). 'Impacts of such climate-related extremes include alteration of ecosystems, disruption of food production and water supply, damage to infrastructure and settlements, morbidity and mortality, and consequences for mental health and human well-being', which as affected 'countries at all levels of development IPCC 2014 WG2 SPM p.6  At already committed degrees of climate change all major food producing regions will suffer crop yield declines with food shortages to which developing children are most vulnerable. This has started. 'Based on many studies covering a wide range of regions and crops, negative impacts of climate change on crop yields have been more common than positive impacts' (high confidence) IPCC 2014 WG2 SPM p.4. Children in all regions are most vulnerable to loss of water security. Communicable diseases have already started to spread from tropical regions to the more wealthy temperate regions, and new diseases are predicted has started, and in the future can affect all countries. Climate change is already increasing the number of refugees, with children most at risk. Climate change driven conflict (a cause of refugees) as long predicted is happening and in the future can affect most counties. 'Climate change can indirectly increase risks of violent conflicts in the form of civil war and inter-group violence by amplifying well-documented drivers of these conflicts such as poverty and economic shocks (medium confidence). Multiple lines of evidence relate climate variability to these forms of conflict'. IPCC 2014 WG2 SPM p. 20.  Adaptation  measures are essential to start working on for all countries, and mainly consists of upgrading public services, which applies to most if not all countries. Adaptation is least likely to benefit children due to their high vulnerability. Limits to adaptation emerge from the interaction among climate change and biophysical and/or socioeconomic constraints. As the IPCC 2014 5th assessment says: 'Opportunities to take advantage of positive synergies between adaptation and mitigation may decrease with time, particularly if limits to adaptation are exceeded. In some parts of the world, insufficient responses to emerging impacts are already eroding the basis for sustainable development'. IPCC 2014 WG2 SPM p. 20.
With current unprecedented accelerating global climate change indicators (StateofOUrClimate.com) and, increasing record emissions and no international action to put global emissions into rapid decline,
​a question exists of whether today's children have a future worth living.
​
Fossil fuel air pollution ​The global horrendous abuse to children today is the air pollution from fossil,fuel emissions UNICEF's 2016 Clean Air Children
April 2018 Pediatrics Journal Climate Change & Global Child Health  'climate change transcends geopolitical boundaries and will have extensive impacts on child health and security. With implications for all of humanity, climate change will disproportionately affect children'
Child rights page
UNICEF 2017 'Climate change is contributing to a growing water crisis and putting the lives of millions of children at risk'. 'By 2040 1 in 4 children are projected to be living in areas of extremely high water stress'
2017 (GHNGN)  The most vulnerable of the vulnerable
18 Feb. 2020 A future for the world’s children? A WHO–UNICEF–Lancet Commission
VIDEOby The Lancet
18 Feb 2020 CNN article
Sept 23 2019 Global Youth Climate Action Declaration
2014, UNICEF The Challenges of Climate Change: Children on the front line