​​July 2015 Science ConsensusvImmediate and substantial reduction of CO2 emissions is required to prevent the massive and mostly irreversible impacts on ocean ecosystems and their services that are projected with emissions greater than those in RCP2.6.

The oceans that collectively make up the World Ocean play a fundamental role in the global climate system.

According to a research paper published in Nature Climate Change (Aug 2013), ocean life is being forced to migrate faster than life on land due to climate induced changes that are occurring in the marine environment.


​There is a clear consensus from the many scientific statements  that are now being made about ocean acidification, that rapid,  unprecedented changes are occurring (EPOCA statement).​​ According to the NOAA on ocean acidity, the oceans are more acid than they have ever been over the past 20 million years. In 50 years acidity will increase 120% if no emergency response is initiated.

A 2009 Interacademy ​​science statement warned that at current emission rates ... all coral reefs and polar ecosystems will be severely affected by 2050 or potentially even earlier.

Ocean acidification is occurring faster today than it has over the past 300 million years.

The oceans are being warmed and acidified forever. Scientists expect that the ocean will eventually take up about 85% of anthropogenic CO2- because the ocean takes ~1000 years to mix, this process will take many hundreds to thousands of years (see Carbon and Climate).
​
The ocean (World Ocean) impact due to atmospheric CO2 pollution is often forgotten in climate change considerations. Our planet Earth is in effect the Ocean planet because the World Ocean provides an incomparably larger habitat for life than the land.

​​The oceans are the ultimate controller of the climate system. By absorbing CO2 from the air at the sea surface, carbon is combined with calcium by shell bearing marine organisms and sinks to the ocean floor when these organisms die, and in so doing gets locked up in ocean sediments. Over ages of time the calcium compressed in the sea floor sediment returns to the land as limestone and dolomite rock. This is the ultra-long ocean carbon cycle. ​

Global heating from GHG emissions is largely ocean heating because the oceans have taken up over 90% of greenhouse gas heat (NOAA) that has been added to the lower atmosphere. Ocean heat content has been rapidly increasing-and accelerating since 2010.

The key reason as to why the global warming surface temperature increase  has stalled is because, quite suddenly, near surface ocean heat is being transported into the deep ocean to such an extent, which in actual fact means that global heating has accelerated further.

This greenhouse gas heat that is stored in our oceans is a large reason for our future commitment to much more land surface warming than we have experienced to date. ​​

It takes 30-50 years for the heat of a greenhouse gas emission to be diffused and circulate through the oceans and register as a temperature increase at the ocean surface. Consequently, due to the ocean heat lag, the heat taken up by the oceans is the primary cause of climate change inertia. Even if emissions were to stop, the ocean would continue to add heat to the planets surface. This is the ocean heat lag warming future commitment and also partly explains why global warming persists for over a thousand years.
​
The warming of the Ocean was initially limited to the surface water, but research on ocean heat content now shows that over the past decade there has been a large increase in heat transfer to the deep ocean. ​​This explains the stalled global average surface warming, and in fact means global heating has increased.

Warming of the surface water causes bleaching and death of corals reefs, which play a fundamental role in supporting ocean biodiversity. ​​

It is estimated that the oceans have absorbed as much as 40% of the emitted CO2 through the vast expanse of surface waters. ​​CO2 gas dissolves in sea water to form carbonic acid, which results in ocean acidification. Acidification affects the ability of marine organisms to calcify - some shell forming species are showing signs of decalcification - and damages the biological carbon pump essential for assimilating and sinking carbon. ​​Ocean  acidification is yet another reason why atmospheric carbon pollution is catastrophically dangerous.

Mar 17 2021 ​Ocean areas that, if strongly protected, would help solve climate, food and biodiversity crises. And bottom trawling releases as much CO2 as all aviation. ​

19 July 2018 ​​Large-scale ocean de-oxygenation during the Paleocene-Eocene Thermal Maximum. [and sulfidic the combination] rendering most of oceans 'uninhabitable by multi-cellular organisms'. PDF

4 May 2017 ​​Deoxygenation. Decades of data on world's oceans reveal a troubling oxygen decline. “The trend of oxygen falling is about two to three times faster than what we predicted ...'

23 March 2016 Reviews and Syntheses: Ocean acidification and its potential impacts on marine ecosystems
extends 'the oceanic areas that constitute a source instead
of a sink or carbon dioxide presently mostly concentrated in
the equatorial zone' ... 'ocean acidification is expected to introduce deep changes in marine habitats, and food web processes.'

9 April 2015 Triassic mass extinction may give clues on how oceans will be affected by climate change.

May 2014 Phytoplankton and zooplankton biomass will decrease 6 and 11 percent due to climate change.
​​
Jan 2014 Study projects unprecedented loss of corals in Great Barrier Reef due to warming reduced to 10% by
​less than 1-2C warming.​
​​​


June 2014 Fish and aquatic life living in the high seas are more valuable as a carbon sink than as food and should be better protected, according to new research.

6 Sept 2013 ​​... water temperature has a direct impact on maintaining the delicate plankton ecosystem of our oceans. 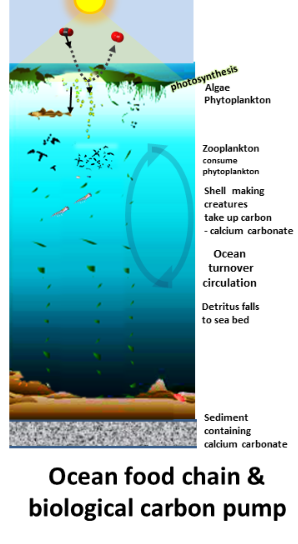 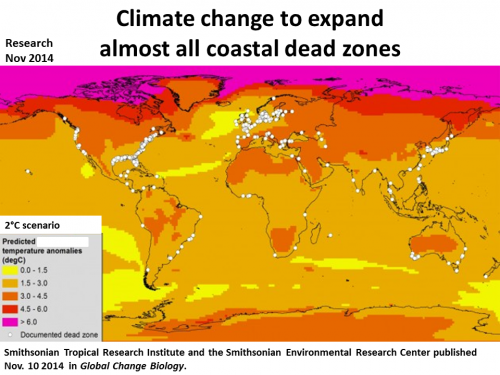 Ocean scientists for Informed Policy
Global warming will expand both coastal dead zones and deep ocean dead zones
16 March 2017 Coral reefs are doomed without immediate measures (global emissions decline) on global warming
Australia Climate Council July 2018 Extreme ​ocean temperatures occurring every two years ... 'effectively destroying the Great Barrier Reef' ​
July 2010 ​​Global phytoplankton decline over the past century: -40% in 60 years
Oct 2017 BIOACID  largest study ever shows that ocean acidification along with other ocean effects of atmospheric GHG pollution puts practically all marine life at risk.
​Oceans have absorbed 30% of CO2 emissions.
Ocean acidification
​page
3 July 2015  '...impacts on key marine and coastal organisms, ecosystems, and services are already detectable, and several will face high risk of impacts well before 2100, even under the low-emissions scenario (RCP2.6). These impacts will occur across all latitudes,  Third, immediate and substantial reduction of CO2 emissions is required to prevent the massive and mostly irreversible impacts on ocean ecosystems and their services
2017 Ocean Deeply Ocean warming and de-oxygenation will impact phytoplankton - that make most of our oxygen. Ocean acidification ​and warming will impact zooplankton essential for ocean life and for sinking carbon.
Sea surface temperature tracker
We should be assessing rate of climate change primarily by ocean heating
IPCC 2019 Oceans Report (& cryosphere) IPCC Ocean extracts 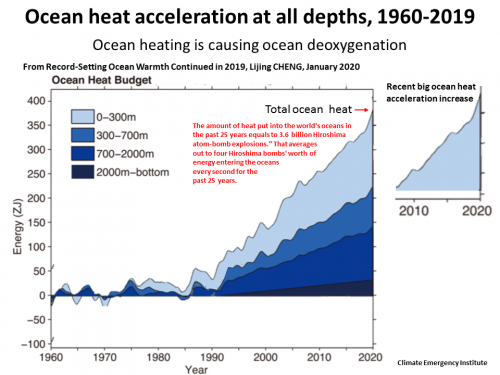 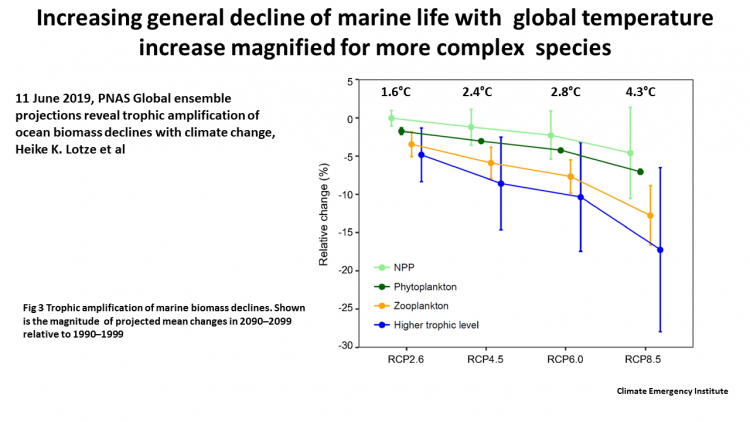 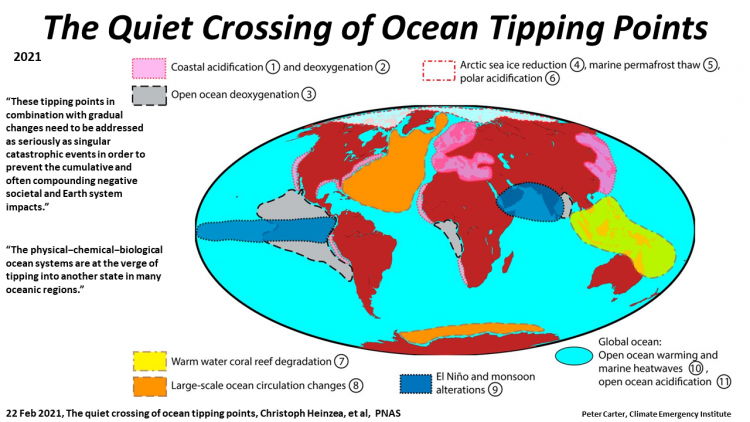 5 Aug 2021 Observation,,, for a collapse of the Atlantic Meridional Overturning Circulation
17 June 2015Growing feedback from ocean carbon to climate