Under the 1992 UN Framework Convention on Climate Change nations are obligated to limit their emissions to keep atmospheric greenhouse gas concentrations at safe levels. Atmospheric CO2 is now catastrophically high at 411 ppm. Atmospheric CO2 equivalent (all the GHGs) is at 500 ppm.

​​Article 2 Objective
The ultimate objective of this Convention and any related legal instruments that the Conference of the Parties may adopt is to achieve, in accordance with the relevant provisions of the Convention, stabilization of greenhouse gas concentrations in the atmosphere at a level that would prevent dangerous anthropogenic interference with the climate system. Such a level should be achieved within a time frame sufficient to allow ecosystems to adapt naturally to climate change, to ensure that food production is not threatened and to enable economic development to proceed in a sustainable manner.

​​​Now in 2019 all nations that have large emissions have not complied with these obligations. In fact CO2 and methane global emissions are tracking the worst case scenario, which leads to a catastrophic global warming of over 4C by 2100, much higher after 2100.


Climate Action Tracker ​periodically reviews the national emissions targets, compared to what is required for a 2C and a 1.5C limit by 2100. The September 2019 review projected a warming of about 3C by 2100. However actual current policies project a warming of up to 3.4C by 2100. Warming will continue after 2100 leading to much higher temperature increases.

Since the 2015 UN Paris Agreement ​​the danger level of global surface warming has been put at 1.5C from the old (1996) catastrophic 2C.
Under the Paris Agreement, emissions were made non binding national emissions targets called INDCs (intended nationally determined contributions).
The longstanding 2C equilibrium warming limit is being treated as only a limit 2100, making 1.5C even more vital for us all -our common future survival.

​​The combined INDCs (both unconditional and conditional) were projected by a May 2016 Update by the UN Climate Secretariat to result in a global emissions INCREASE of 16% by 2030 (see below). There has been no substantial improvement since (UN Climate Summit September 2019). 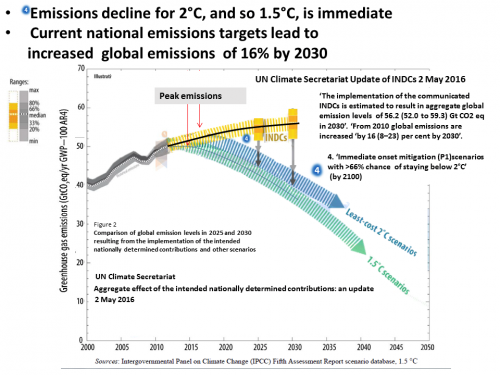 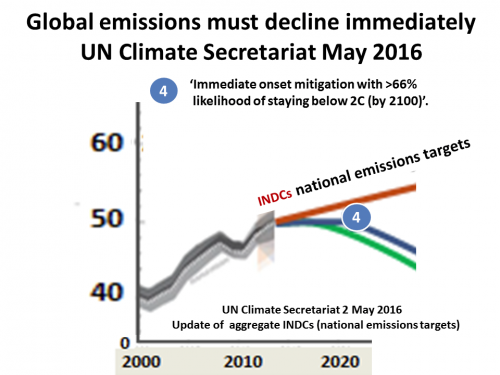 The IPCC 2014 5th assessment projected that global emissions must be declining between 2015 to 2020 at the latest to avoid catastrophic global climate change.

​
​​The 2007 4th assessment had the same recommendation, that global emissions must have by 2015 at the very latest to avoid going above 2C. 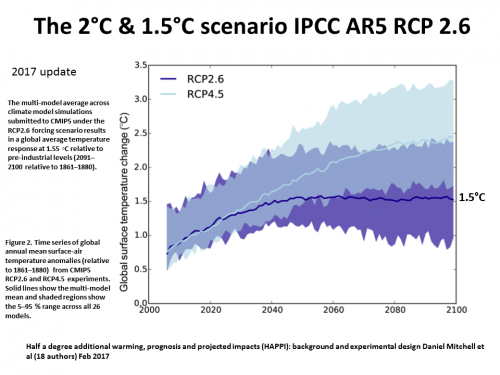 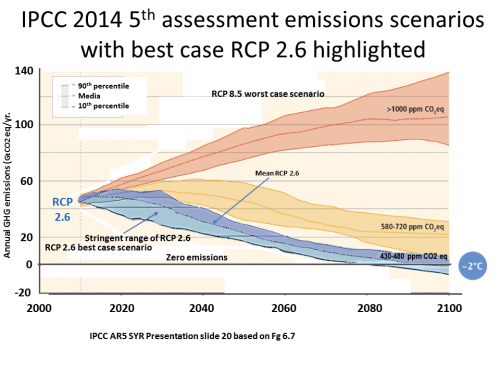