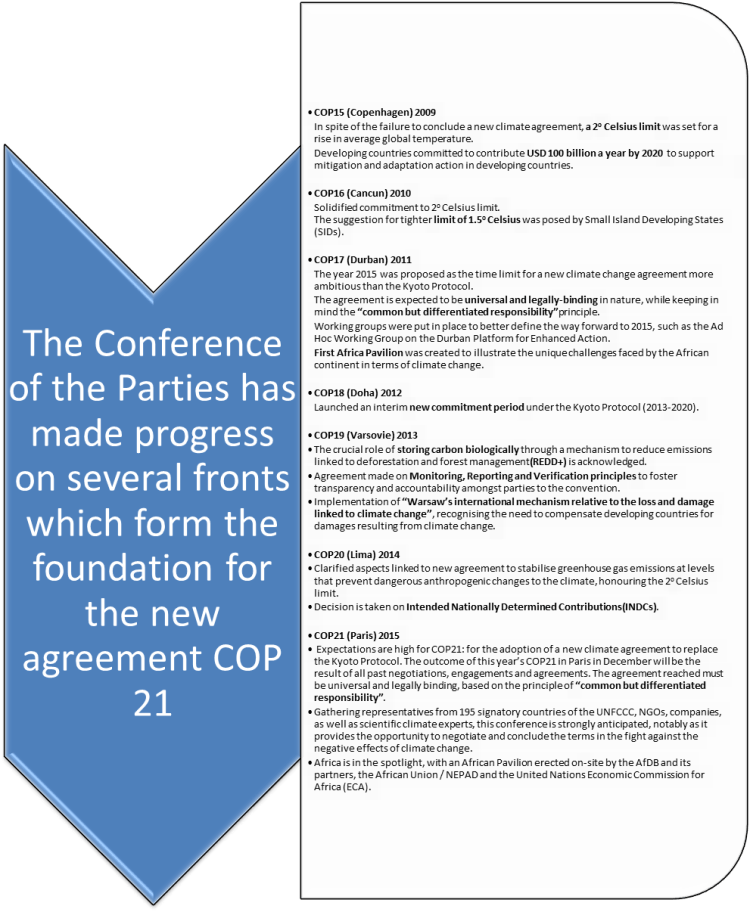 Past Conference of Parties (COP) Meetings and Progress made:

WhyCOP21 is important to African Nations

The 21st Conference of Parties (COP 21)of the United Nations Framework Convention on Climate Change (UNFCCC) scheduledfor Paris from 30th November to 11th December 2015 willbe a landmark event in the push of global climate governance framework,especially for Africa.

It's been known that Africa contributesthe least to atmospheric greenhouse gas emissions and it's one of the mostaffected continents by the impacts of climate change as well as the one at a higherrisk of impact from increased global warming.Currently, climate change has brought about serious threat to Africa'ssocio-economic development progress.Anincrease in temperature of above 2 degree Celsius will most likely result in ahuge disaster for the continent.

COP 21 will seek to establish a newagreement to climate regime that will succeed the Kyoto Protocol, which expiresin 2015. For Africa, a progressive agreement in Paris should be ambitious andas close as possible to the recommendations of the IPCC 5th Assessment Report,and should include:

·Anemphasis on the importance of adaptation for Africa, and

·Additionaland adequate finance, including a strong commitment to capitalize the Global ClimateFund (GCF)

In general, expectations are high forCOP21. These include the adoption of a new climate agreement to replace theKyoto Protocol. The outcome of this year's COP21 in Paris in December will bethe result of all past negotiations, engagements and agreements. The agreementreached must be universal and legally binding, based on the principle of "common but differentiated responsibility".

Gathering representatives from 195signatory countries of the UNFCCC, NGOs, companies, as well as scientific climateexperts, this conference is strongly anticipated, notably as it provides theopportunity to negotiate and conclude the terms in the fight against thenegative effects of climate change.

Africa is in the spotlight, with anAfrican Pavilion erected on-site by the AfDB and itspartners, the African Union / NEPAD and the United Nations Economic Commissionfor Africa (ECA).

In preparation for COP 21, Africa Nationshave already launched several preparatory activities to support the developmentof the Africa Common position on the post‐Kyoto agreement. These preparatory meetings have helped totrace the evolution of the African position in global climate governance fromthe inception of the UNFCCC, discussed major milestones in the trajectory ofthe Convention, identified key issues for consideration in the process leadingup to Paris, and clarified the key elements of the emerging Common AfricanPosition on Climate Change. Other high profile meetings that took place includethe The15thSession Africa Ministerial Conference on Environment (AMCEN) under thetheme "Managing Africa's NaturalCapital for Sustainable Development and Poverty Eradication"which was held between 2-6 March, 2015 withExperts and Ministerial Sessions taking place, and the Committeeof African Heads of State on Climate Change (CAHOSCC) which was held on 25September, 2015 on the margin of the 70th anniversary of the United NationsGeneral Assembly in New York .

Thesemilestone meetings will culminate in the hosting of the African participants inCOP 21 at a proposed Africa Pavilion in Paris. The objectives of this pavilioninclude:

COP21 Africa Pavilion objectives will be to:

·Provide a forum for discourse anddebates that locate Africa-relevant climate change issues and themes in thelarger context of the continent's sustainable development;

·Provide a platform to further enhancethinking and critical debate on the linkages between available information andknowledge, technical services and policy directions for climate change inAfrica;

·Create opportunities forknowledge-sharing among decision makers and practitioners, the researchcommunity and negotiators;

·Explore the implications of climatechange for the inclusive growth agenda, especially focusing on the interactionsbetween climate change and vulnerabilities;

The Africa Pavilion was mandated by theAfrican Heads of state and is a physical space where Africans meet tostrategize and synchronize their participation in the COP process. It wassuccessfully launched at COP 17 in Durban. It is expected that given thesignificance of COP 21, the Africa Pavilion platform will symbolize the unityof purpose of Africa in the face of climate change, and the importance of aglobal climate agreement that adequately addresses Africa's concerns and setsthe foundation for sustainable climate smart development part from it beingjust the physical space hosting African dialogues, events and exhibitions.ClimDev-Africa is overseeing the processes towards theestablishment and organization of the Africa Pavilion at COP 21, and discussionswith the host nation and other key stakeholders towards this end havecommenced.

During Africa Pavilion session, discussioninto the main conclusions from the AGN Addis Ababa meeting; the preparationsfor the AMCEN meeting and for the CAHOSCC and provide updates on the key themesunder development for the Africa Pavilion will take place.

COP21 of United Nations Conference on Climate Change, knownas "Conference of the Parties," or by its acronym, "COP,"will be the 21st conference of its kind (COP21) and will take place in Paris,France, from November 30 through December 11, 2015.

The 'COP' is the supreme decision-making body of the UnitedNations Framework Convention on Climate Change (UNFCCC), adopted in 1992 duringthe Earth Summit in Rio de Janeiro, Brazil. Its objective is to understand and findsolutions to the negative effects caused by climate change. Unified by the objectiveand common struggle against global warming, most countries of the world havemet every year since 1995.

The new agreement expected at COP21 needs to be ambitiousenough to keep global green-house-gas (GHG) emissions concentrations in theatmosphere at levels that will ultimately ensure a less than 2 degrees Celsiusrise in global average temperature before 2100.

Given the particularly high stakes at COP21, much isexpected, including the ratification of the first legally binding globalagreement to fight against human-induced climate change. Expected to enter intoforce in2020, this agreement will address both mitigation – the reduction ingreenhouse gas emissions – and adaptation to the negative impacts of currentand future climate change.

·Mitigation refers to all activitiesthat contribute to reducing global greenhouse gas concentrations in theatmosphere. For example, it may include initiatives that renounce fossil fuels toinstitute renewable energy production, such as wind and solar energy, or enhancingenergy efficiency. Such activities may also include measures to combatdeforestation and forest degradation, forest management, or adopting practicesthat avoid releasing greenhouse gases (carbon dioxide, methane) into theatmosphere.

Given the delicate nature of the discussions which requirebalancing the interests of every country, as well as distributing effortsbetween developed countries historically responsible for greenhouse gas emissionsand emerging economies, the negotiations for the Paris Agreement have beenarduous.