​​​However, committed global warming is not being made the basis of climate change policy or planning.

​​​​​The main characteristic of the climate system is its great ‘inertia’.

​​Today’s committed global warming is in much greater degree of warming that will happen even if all emissions were rapidly reduced to virtually zero.


​​Today's full committed global​warming
​due to climate ​science is 2.4°C
(Ramanathan​, Feng  ​Avoiding
​Dangerous Climate interference ...
PNAS 2008)​
​and ​warming will continue ​for over
​ 1000 years​
​
•0.8°C today's surface temperature increase
​
•0.7°C 'hidden' deferred warming from
​ the oceanheat lag.
​The ocean heat lag commits any
​temperature ​increase before 2100
​to almost double ​after 2100 at
​temperature equilibrium. ​
​
•0.9°C 'hidden' deferred ​warming ​​due to
​aerosol cooling that will be 'unmasked'
​when fossil air ​pollution or fossil energy
​ production stops​​​
​
​• Plus another 1.0°C which is the
fastest time from emergency emissions
reduction to atmospheric GHG stabilization.​​

​​3. Economic commitment due to the market failure that the economics does not make atmospheric greenhouse gas polluters pay any of the cost of the pollution. Until polluters are charged by governments for the cost of pollution it is economically impossible for greenhouse gas emissions to reduce.

​​This most important aspects of the climate science are due to the following:
​
1.The ocean heat lag - the delay between the emission of greenhouse gases (GHG) to the added heat from the increased atmospheric GHG registering as a temperature increase at the surface of the planet. This delay (lag) is 30 to 50 years.

​​2. The transfer of this heat from the increased amount of atmospheric greenhouse takes place extremely slowly over a time frame of hundreds of years.

​​3. The main greenhouse gases last in the atmosphere for a long-time and are called ‘long-lasting atmospheric gases.' In particular 20% of all carbon dioxide emissions last for 1000 years in the atmosphere.

​​​Since the publication of this IPCC graph
​in 2001 (IPCC TAR SYR Ch 4) scientists have determined that
​the global temperature will not stabilize
for over 1000 years following the stabilization
of atmospheric carbon dioxide (S Solomon
PNAS Irreversible global warming due to
​carbon dioxide emissions​).

​​We certainly cannot afford to take 100 years
​now to stabilize atmospheric carbon dioxide- but it will still take a long time.

​​In 2007 the IPCC said that for atmospheric carbon dioxide
​to stabilize long-term carbon dioxide emissions had to
​be reduced to zero (IPCC AR4 FAQ 10.3.

​​​Until atmospheric carbon dioxide is stabilized, ocean
​acidification will continue to increase.


​​​Climate system inertia ​due to the ocean heat lag

​​It takes 30-50 years for the heat from an emission greenhouse gas into the atmosphere to register as a temperature increase at the surface of the planet. This is because most of the planet is water, so most of the heat is taken up by the oceans. The heat is stored as it circulated and distributed throughout the oceans before it can register as a surface temperature increase.

​​The graphical part of the diagram shows how
​atmospheric concentrations of carbon dioxide
​corresponded to temperature.
​Transient or near-term warming (in blue)
​is only a fraction of the total warming
​the equilibrium warming expected
to occur (in red).
​
​Because of time lags inherent in the
​Earth’s climate, warming that occurs in response
​to a given increase in the concentration
​of carbon dioxide (“transient climate change”)
​reflects only about half the eventual total warming
​​(“equilibrium climate change”) that would occur
​for stabilization at the same concentration
​(see Figure Syn.4).
​
​For example, if concentrations reached
​550 ppmv, transient warming would be
​about 1.6°C, but holding concentrations
​at 550 ppmv would mean that warming would
​continue over the next several centuries,
​reaching a best estimate of an equilibrium
​ warming of about 3°C.

​The ocean heat lag and inertia

​​​​​​​​​​​​​Global temperature increases reached by 2100
​are absolutely ​committed by the climate system
​inertia (ocean heat lag) to ​almost double over
​the long term after 2100.

​​This is an additional global warming or deferred warming
​commitment.

​​2. ZERO CARBON
​
​A more certain reason is that all industrial fossil fuel combustion
​has to stop because the science is definite that so long as industrial
​carbon dioxide is being emitted, the global temperature , climate
​change and ocean acidification cannot stop increasing.

​​Reducing or stopping the aerosol containing air pollution unmasks the degree
​of global warming being avoided by the aerosol cooling effect.
​

​​Aerosols or tiny particles suspended in the atmosphere
that can come from air pollution,
volcanoes dust and ocean spray.
​They can reflect or absorb sunlight directly.
​They can seed cloud droplets and brighten clouds.

​Research is indicating that the air pollution cooling
​aerosols exert a very substantial cooling effect,
​ that is masking a lot of the global warming radiation
​from the lower atmosphere by the increase
​in atmospheric greenhouse gases.

​​Air pollution from burning fossil fuels include
​tiny particles of acid, which exert a global cooling effect.
​The latest models indicate this cooling effect
​to be as high as nearly 1°C.

Time from start of emergency emissions
​reductions to atmospheric GHG stabilization
​​​​​​​​​​​​​​​​​​​​​To totally decarbonize the world energy economy
​is an essential and vast undertaking.
​This Climate Interactive scenario matches the most
​rapid proposals, and it takes 50 years to
atmospheric stabilization.
​The rate of warming since 1980 has been almost
​0.3° C per decade (IPCC says 0.2° C /decade).
​This makes at least another 1°C.
​​​​
Stabilization of atmospheric carbon dioxide requires that all ​industrial carbon dioxide ​emissions be stopped.

​​​​​​​​​​​​​​​​​Therefore it is impossible that the global temperature ​climate change and ​ocean acidification will stop
​increasing ​unless all industrial ​carbon dioxide emissions ​are completely stopped.

​​​The bottom line is that world powers are committing the world to global climate catastrophe.


​​​​
Unless governments adopt a policy of reducing carbon emissions to zero by charging greenhouse gas polluters the cost of pollution, the world is committed to increasing greenhouse gas emissions resulting in accelerating atmospheric greenhouse gas concentrations that can only lead to global climate catastrophe.​​​​​​ 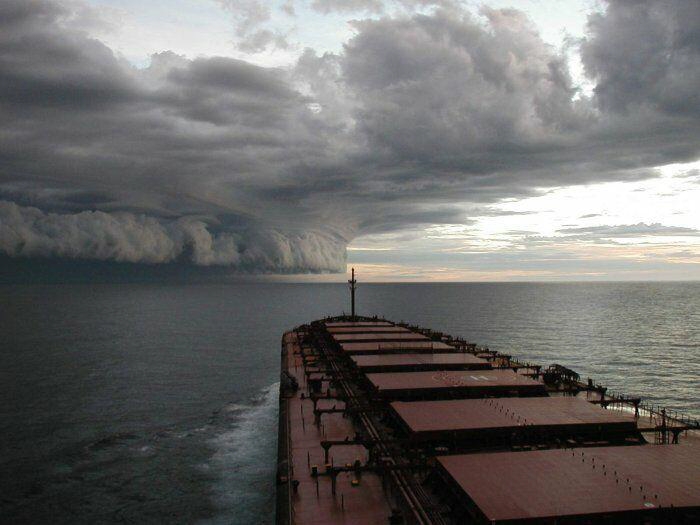 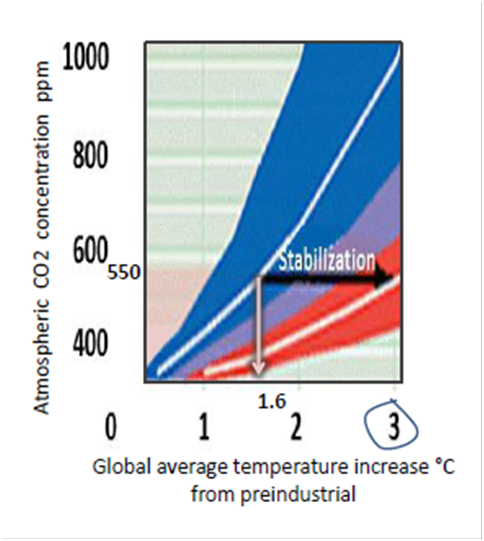 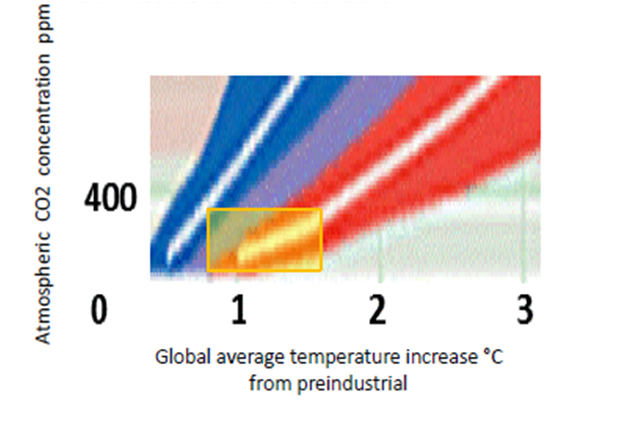 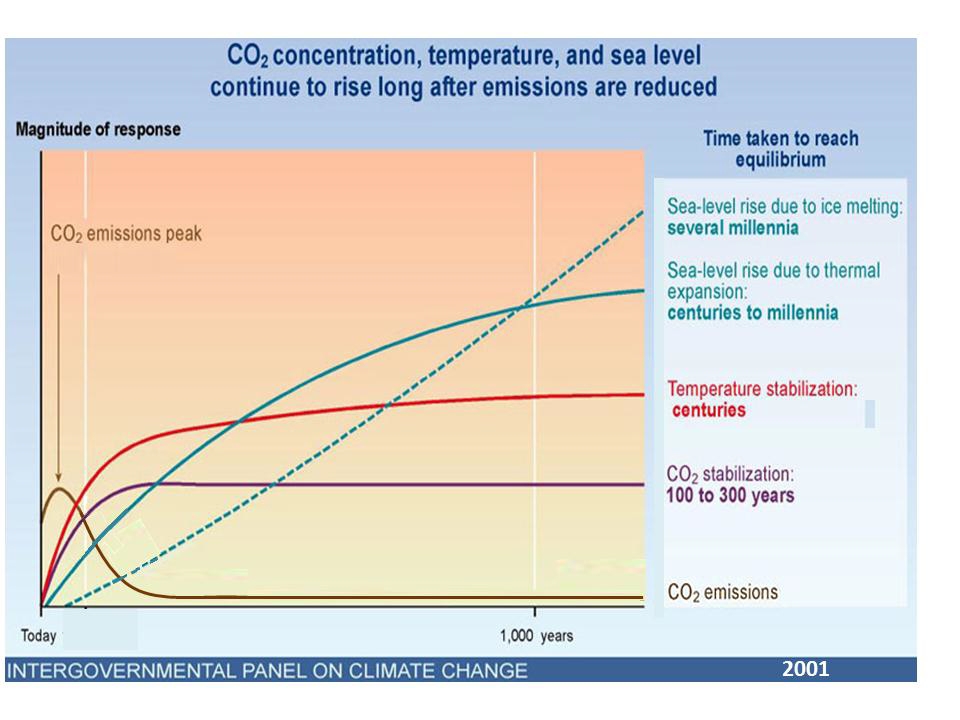 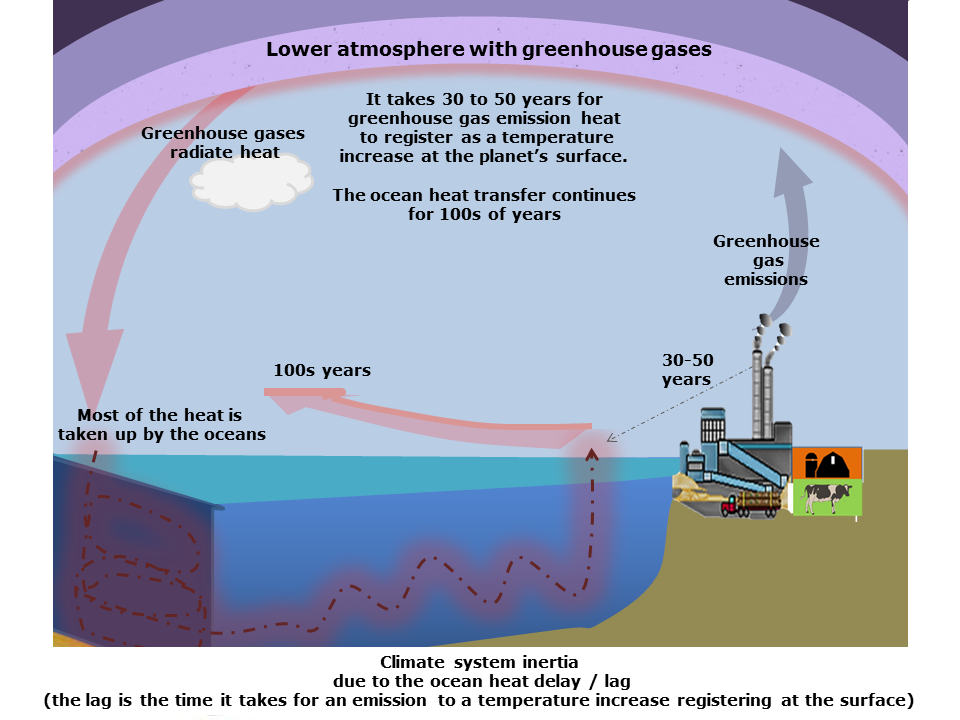 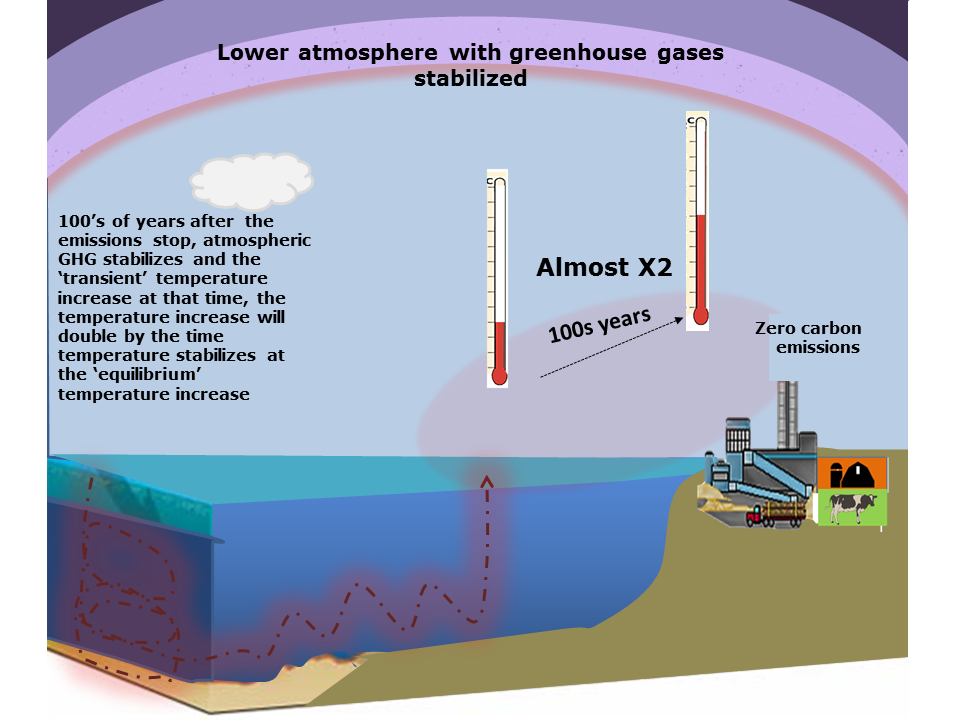 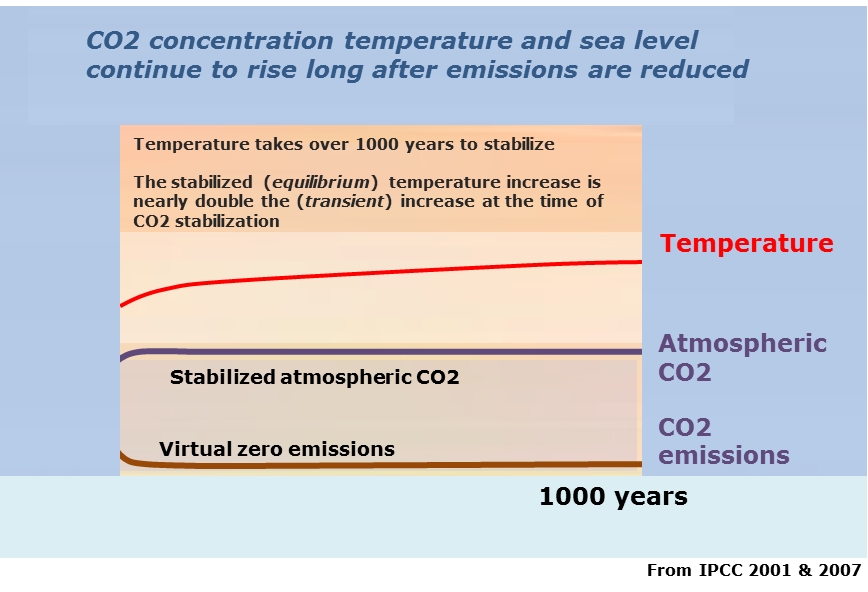 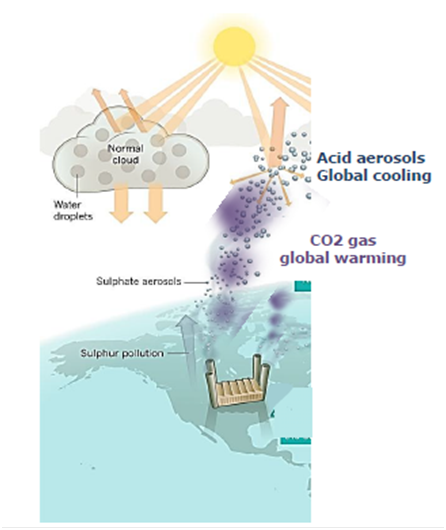 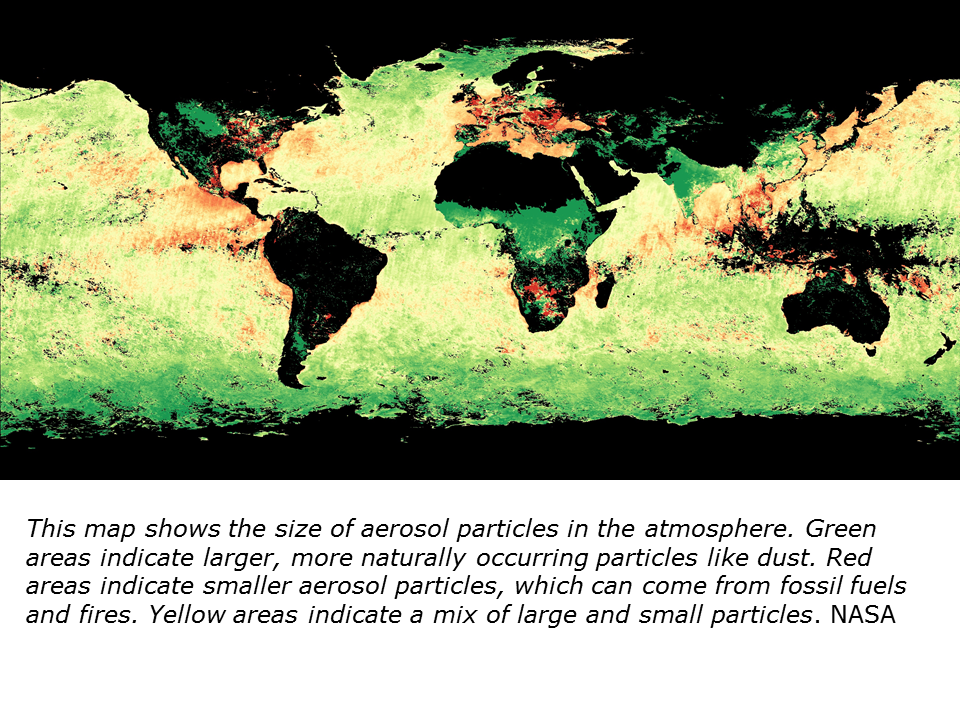 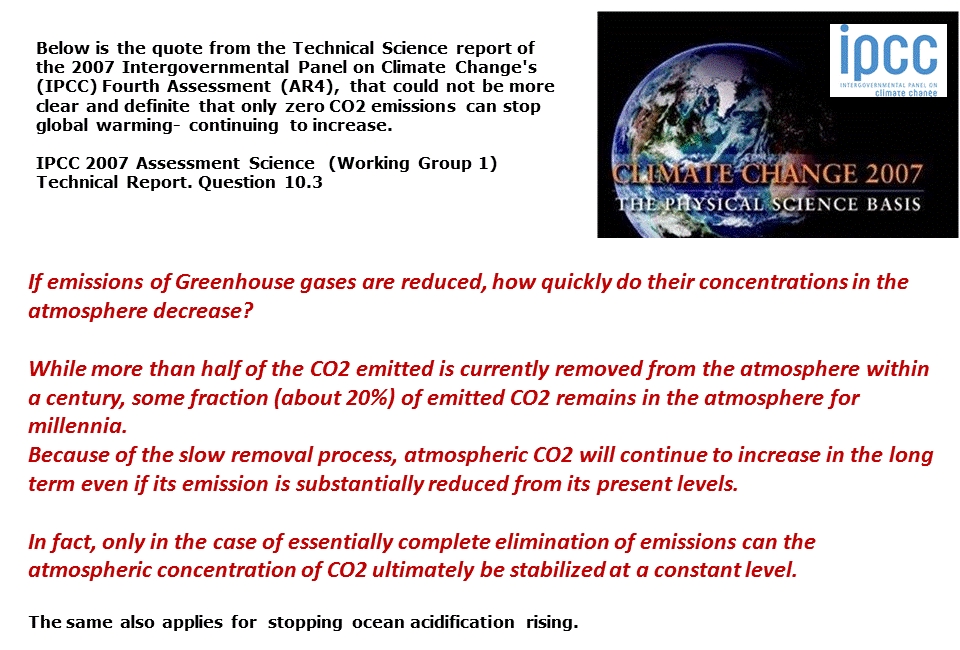 "Even the most aggressive CO2 ​mitigation steps as envisioned ​now can only limit further additions
​to the committed warming, ​but not reduce the already ​committed GHGs warming of 2.4°C." (Ramanthan, Feng 2008​) 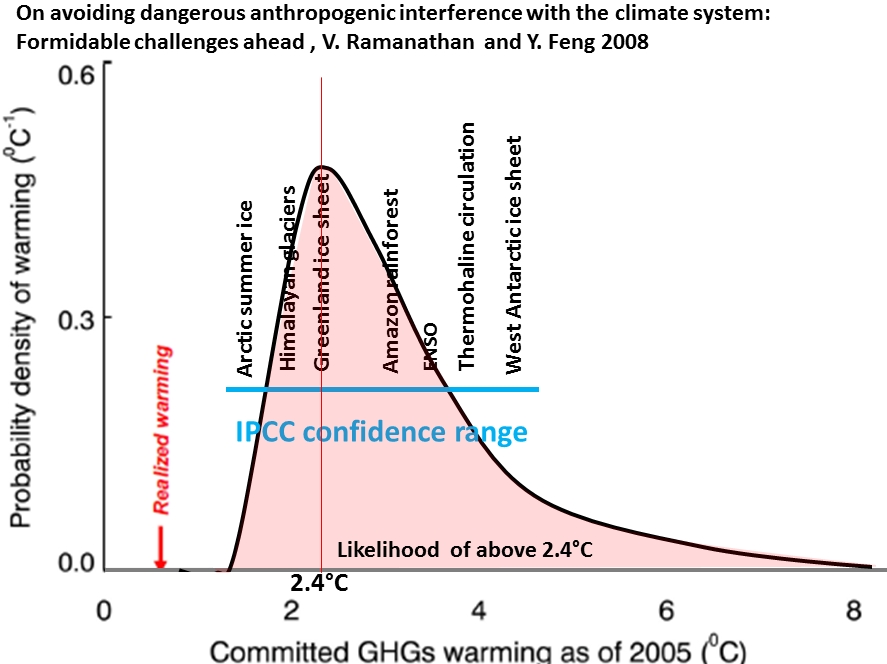 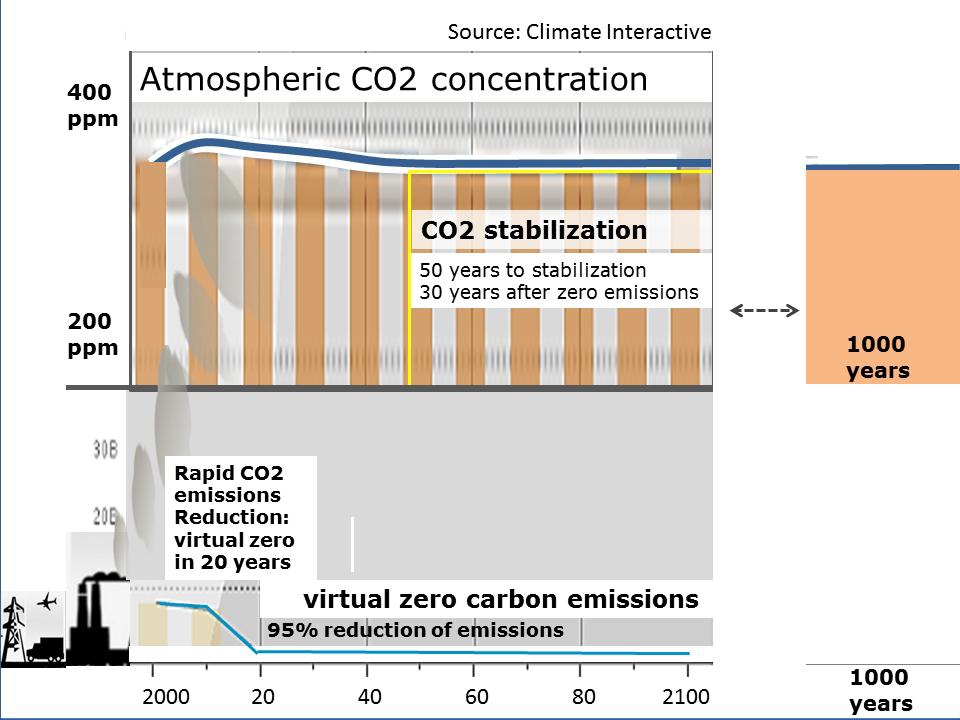 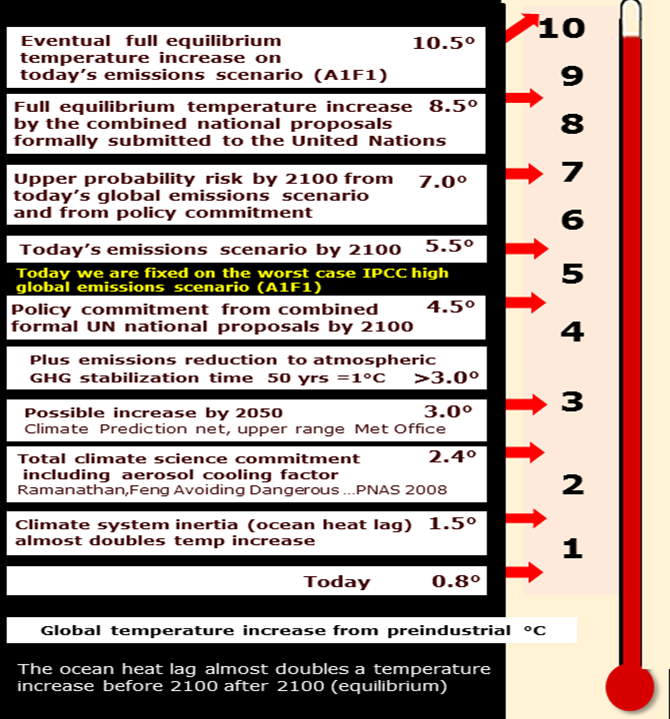