This ocean heat lag commitment to added future warming is shown by the graph from the National Research Council's 2010 report. The full eventual equilibrium temperature increase is 'almost double' today's transient increase- which is the warming at the time of atmospheric GHG stabilization.
Climate feed backs

A ​​climate feedback happens when the warming  of the  planet causes a change to some aspect of the planet that results in even more global warming, so this is another unavoidable source of additional warming.
​Positive (bad) feedbacks to the climate system happen when global warming (or CO2 emissions) have an effect on some component of the planet that increases the global warming even more.
​
There are a number of positive carbon feed backs by which components of the warmed planet add more carbon emissions as CO2 and/or  methane. An obvious one would be forest fires - global warming increases forest fires that emit carbon dioxide (and some methane) when they burn.
These dangerous carbon feed backs were not included in the 2007 IPCC assessment of the 'most likely' temperature increases. They are inevitable results of more GHGs in the atmosphere and the resulting global warming. The IPCC has always acknowledged (since the very first 1990 IPCC assessment) they are real and inevitable, even though they are excluded from the warming porjections.
Greenhouse gas feedbacks (1st IPCC assessment 1990 SPM p. 18)
The net emissions of carbon dioxide from terrestrial ecosystems will be elevated at higher temperatures.
A net flux of carbon dioxide to the atmosphere may be particularly evident in warmer conditions in tundra and boreal legions where there are large stores of carbon.
It the oceans become warner, their net uptake of carbon dioxide may decrease because of changes in (i) the chemistry of carbon dioxide in seawater, (ii) biological activity in surface waters, and (iii) the rate of exchange of carbon dioxide between the surface layers and the deep ocean.
Methane emissions from natural wetlands and rice paddies are particularly sensitive to temperature and soil moisture.  Emissions are significantly larger at higher temperatures and with increased soil moisture.
Higher temperatures could increase the emissions of methane at high northern latitudes from decomposable organic matter trapped in permafrost and methane hydrates.

Most of the planet's carbon is stored cold or frozen in the Arctic. These are subArctic peat rich wetlands, ​​permafrost (permanently frozen peat) and subsea floor frozen solid methane gas hydrate. Permafrost thawing is estimated to add another 0.8C to the global warming by 2100. If global emissions continue on today's worst case scenario terrestrial carbon feedback will add 1.5C and Arctic feedbacks another similar amount by 2100- adding 3.0C to what the assessments call the 'most likely' temperature increase.
​
​ 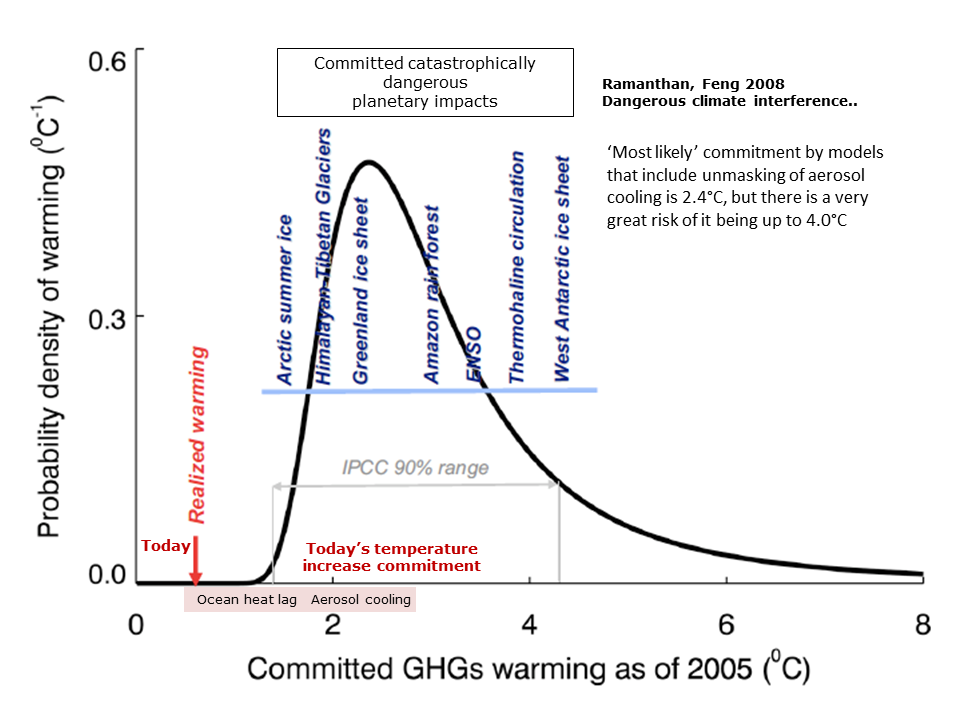 On avoiding dangerous anthropogenic interference with the climate system: V. Ramanathan and Y. Feng PNAS 2008
​​Before any chance rapid carbonization though there is the social inertia of the time taken for the public to understand that there is a global climate emergency and for that to result in political pressure forcing governments to act of reducing emissions. Today this inertia or delay to governments taking any action seems endless.

​​​The IPCC recognized this in its 2007 technical report.
​​Inertia in both the climate and socio-economic systems would need to be taken into account when mitigation actions are being considered. Mitigation actions aimed at specific climate goals would need to factor in the response times of the climate system, including those of the carbon cycle, atmosphere and oceans. A large part of the atmospheric response to radiative forcing occurs on decadal time scales, but a substantial component is linked to the century time scales of the oceanic response to the same forcing changes (Meehl et al., 2007). Once GHG concentrations are stabilized global mean temperature would very likely stabilize within a few decades, although a further slight increase may still occur over several centuries (Meehl et al., 2007).

Now we know ​​we can expect 20 years at best to decarbonize and from decarbonization the ocean heat lag commits us to double the warming at that time, it is time to consider how long global warming lasts.
​
​The duration of warming is thousands of years - practically for ever in terms of impacts on human populations. For example, this makes crop impact declines practically irreversible.

Global average temperatures increase while CO2 is increasing and then remains approximately constant until the end of the millennium, despite zero further emissions .
(Irreversible Climate Change Due to Carbon Dioxide Emissions, Susan Solomon et al, PNAS 2009.)

Climate changes that occur because of carbon dioxide increases are expected to persist for thousands of years even if emissions were to be halted at any point in time. (NRC, Climate Stabilization Targets, 2010. page 16)
​​
The ocean heat lag makes global warming last for centuries and the ultra long atmospheric life time of a large proportion of CO2 emissions (see next section) means the increased global warming temperature will last thousands of years, which is practically for ever.

This was illustrated in the 2001 IPCC assessment by the graph opposite.
​Even cutting CO2 emissions virtually zero the global temperature has
​not totally stabilized ​at 1000 years.

Duration of GHG Emissions in the Atmosphere

Long-lived greenhouse gases (LLGHGs), for example, CO2, methane (CH4) and nitrous oxide (N2O), are chemically stable and persist in the atmosphere over time scales of a decade to centuries or longer, so that their emission has a long-term influence on climate. (IPCC 2007 WG 1)
So long as these GHGs are being constantly emitted in large quantities from their industrial age sources they are bound to accumulate in the atmosphere.

​​The burning of fossil fuels for energy, as is well known, emits air pollution - and among these pollutants are acid aerosols. These minute particles (aerosols)  suspended in the lower atmosphere reflect solar energy and have a global cooling effect. When/if global air pollution is reduced the aerosol cooling will be reduced, and full warming of the CO2 'unmasked'.  The zero carbon emissions science makes it definite that we have to stop burning fossil fuels for energy  at which time acid aerosol pollution will cease along with their cooling effect. This will rapidly unmask extra warming.

The aerosol pollution cooling effect is estimated from 0.4C (IPCC 2007) to a full one degree, and the recent research indicates it is at the higher range. ​​

​​There is one 2008 paper (below) that estimates today's committed warming at 2.4C which accounts for the ocean heat lag and the committed unmasking of fossil fuel aerosol cooling of about 1C ​​, but this is still only part of the real total commitment.
​Today's practically unavoidable 'total' commitment by 2100 is 3C.
That results in an eventual commitment over the centuries following 2100 of over 5C.​
One reason it is so high is that we include the warming ​incurred over the time taken to stabilize atmospheric GHGs, which the IPCC AR5 refers to a study estimating that at 1.3C.

That is, ​if the world launched a climate change response today, cutting carbon emissions to zero as fast as possible we could not avoid a warming of 3C by 2100, which is a commitment to an eventual warming after 2100 of about another 3C due to the ocean heat lag. In fact it would be even more because it depends on the extent of additional carbon feedback emissions.

This clearly is a planetary emergency. A vast international ​​emergency response redeveloping all fossil fuel energy sources to clean zero carbon energey and the capacity to draw down CO2 from the air, could in theory get warming to stabilize over the very long term at about 1C (IPCC AR5 RCP scenario 2.6 /or RCP 3 PD).
​
Here is our situation today.
​Today's global average temperature increase from pre-industrial times, is 0.8C which is already exerting profound effects on many regions, like the Arctic.

Most climate experts think that it is far too late to avoid going over the 2C policy limit. ​​
​
The first fact of climate science commitment (explained below) is that whatever the eventual ​warming it will last thousands of  years, which is practically for ever for the future of humanity.

​
The sources of unavoidable additional warming are shown in this chart. ​​
The global temperature increases are the minimum found inthe climate change science, ​resulting in a simple summation of a high degree of certainty we are committed to at least 3.0C by 2100, even if the world starts a rapid reduction of GHG emissions this year.

This source of added warming is what most scientists mean by 'commitment' so we will look at this first. ​​​​It has been known since the very first IPCC assessment in 1990 that due to the ocean heat lag (alone) the committed global warming is doubled today's degree of global warming. This is inertia (and momentum) of the climate system. Models predict that, for the present day case of an increase in radiative forcing which is approximately steady, the realized temperature rise at any time is about 50% of the committed temperature rise. (IPCC First Assessment Report 1990)
IPCC 1990
Time to atmospheric GHG stabilization  To calculate today's full commitment, there are of course other sources of unavoidable additional global warming- the first being due to the time it takes from reducing emissions to atmospheric greenhouse gas stabilization. Today governments are delaying taking action and there is no end in sight of this delay. What would be the fastest time the world could decarbonize if the emergency was acknowledged?

​​The best case IPCC scenario RCP 2.6 (3-PD) takes about 50 years, like most studies that assume stabilization will not  be till the end of the century. The fastest time contemplated is 50 years, like Bill Hare's 2009  'target 1C'.

​​A literature review by the Clean Air Task Force found the most rapid decarbonization was within 25 years, for one example only.
This 2008 illustration of global climate change impacts by the International Energy Agency is a unique and helpful approach illustrating commitment and its significance. The commitment in this case (as is general) is limited to the ocean heat lag effect.
The last IPCC assessment said that if no more heat were added to the atmosphere from the year 2000, because of the heat from accumulated atmospheric greenhouse gases in the atmosphere being stored in the ocean, the temperature would still increase by another 0.6° C  by 2100 as the ocean heat very slowly spreads out over the surface of the planet.